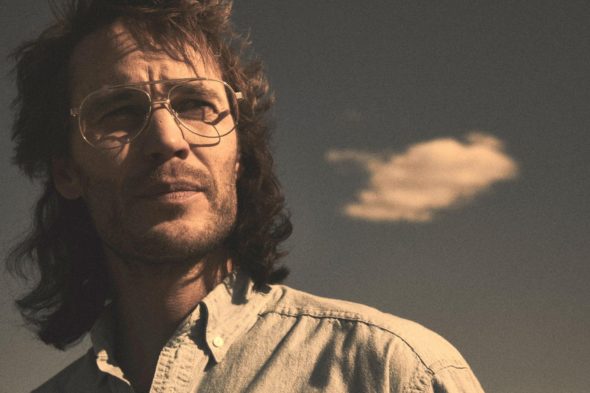 Paramount is headed to Texas. Today, the network announced their new TV show Waco will debut later this month.

The event series is “based on the gripping true story of the 51-day standoff that began with an ATF raid of a religious sect in Waco, Texas and resulted in a deadly fire.” The cast also includes Michael Shannon, Taylor Kitsch, John Leguizamo, Andrea Riseborough, Rory Culkin, Paul Sparks, and Shea Whigham.

In February 1993, the eyes of the world converged on Mount Carmel, a small religious community located just outside Waco, TX. The Bureau of Alcohol, Tobacco, and Firearms (ATF) had just conducted a massive raid on David Koresh and his followers, known as the Branch Davidians. After what became the longest gun battle in U.S. law enforcement history, four ATF agents and six civilians were dead and dozens more were wounded. A 51-day standoff ensued, and the conflict ended after an FBI assault led to a fire that engulfed Mount Carmel, killing 76 men, women, and children.

What precipitated the ATF raid, and what transpired over the ensuing standoff, remains one of the most misunderstood stories in American history. Based on two biographies, Waco: A Survivor’s Story, by Branch Davidian David Thibodeau, one of the nine survivors of the final fire on April 19, 1993, and Stalling for Time: My Life as an FBI Hostage Negotiator, written by the FBI’s Head of Crisis Negotiation Unit Gary Noesner, the six-part scripted television series “Waco” will forever change the way the dramatic siege will be viewed.

The cast of characters include:

Noesner is one of the FBI’s top negotiators and the head of the Crisis Negotiation Unit. At Waco, Noesner quickly finds himself fighting a two-front war. He must contend with both the FBI tactical division’s growing impatience and the Branch Davidians’ distrust of law enforcement.

Koresh is the leader of the Branch Davidians, a religious community located just outside Waco, TX. He is equally as charming as he is moody and self-indulgent. Koresh is a self-proclaimed second messiah whose authoritarian leadership has him in complete control of his followers, who hang on his every word.

Though married to Steve Schneider, she reluctantly sacrifices her marriage to show devotion to Koresh by marrying him and bearing him a child.

Vasquez is sent by the ATF into Koresh’s Mount Carmel community to gather evidence and build a federal case against the Branch Davidians, but surprisingly forges a bond with David Koresh and the people of Mount Carmel.

The first wife of Branch Davidian leader David Koresh and considered the matriarch of the Mount Carmel religious community.

Schneider is the glue that holds Mount Carmel together. It is Steve’s recruiting skills as much as David’s theology that has expanded the Branch Davidians. Schneider is one of Koresh’s closest confidants and supporters but becomes deeply conflicted once his wife announces that she is pregnant with Koresh’s child.

Decker is the tactical commander of the FBI. Known within the bureau for his bravado, he clashes with FBI negotiator Gary Noesner over their opposing philosophies of how to get the Branch Davidians to come out.

Thibodeau is a young musician who joins David Koresh’s band. Though initially reluctant to join the followers at Mount Carmel, he eventually undergoes a dramatic evolution from agnostic to a true believer.

Michelle is the younger sister of David Koresh’s first wife, Rachel. She is also married to Koresh and has a child with him.

Mother of David Thibodeau, one of Koresh’s close followers within the compound. During the standoff, she strikes an unlikely relationship with hostage negotiator Gary Noesner and David Koresh’s mother, as they watch their sons’ respective fates unfold on television.

Martin is a Harvard Law School graduate and father of seven who serves as Mount Carmel’s resident lawyer.

Wiggins is an ATF commander who ordered the initial botched raid on the Davidians compound.

Engleman is a local radio talk host who refuses to trust law enforcement’s version of events and becomes a strange bedfellow for the Branch Davidians, offering them a platform to tell their side of the conflict.

What do you think? Do you remember the story of David Koresh? Will you watch Waco?

It’s sick that the Federal Government, created to protect the liberties of the American Citizen, would attack and murder their own citizens in an effort to revive their image from earlier botched operations. For fellow American citizens to encourage the murderous actions of their government, is not just cowardly, uninformed and sheepish, but they’re also part of the problem in this country. The Branch Davidoans were minding their own business and did not deserve this attack and we the people have every right to defend our lives regardless of who the murderers may be. Germans “obeyed their government” in the… Read more »

Who cares…. they should have obeyed the law/government then maybe most of them would still be around

This did NOT happen in Waco! It took place in Elk, TX. I would think 90% of the people of Waco and surrounding towns have not even been out there to Elk or the compound!