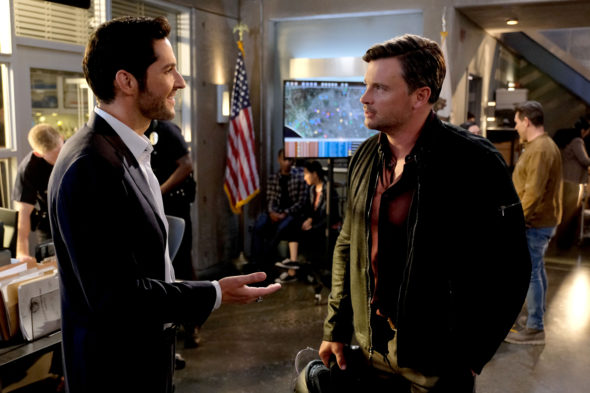 Is the third season of the Lucifer TV show on FOX a blessing or a curse? As we all know, the Nielsen ratings typically play a big role in determining whether a TV show like Lucifer is cancelled or renewed for season four. Unfortunately, most of us do not live in Nielsen households. Because many viewers feel frustration when their viewing habits and opinions aren’t considered, we’d like to offer you the chance to rate all the Lucifer season three episodes. *6/15/2018 status update below.

What do you think? Which season three episodes of the Lucifer TV series do you rate as heavenly, hellish, or somewhere between? Should FOX cancel or renew Lucifer for a fourth season? Don’t forget to vote, and share your thoughts, below.

Love this show! Very entertaining. Look forward to it every week! Please renew!

Yes, i agree too. Please renew this tv series on Fox. This show is crazy funny, with a good cast also. The Las Vegas episode was so cool !!!!

I Love This Show, ist the only reason why i learned some english.

Terrible paganistic, Illuminati-inspired, Hollywood drivel! Glorifying Satan? Really? Come on, now. This show can go to … well, you know what comes next.

The show is based off a comic book series and Satan is just a fictional character anyway. He doesnt exist. Just like none of the characters from the original source material dont exist. It is just a show that is meant for entertainment. Chill.

I hate to see the day when You are sadly mistaken. I will definitly pray for You, Mike. However, we are not here to get into a religious debate so I will leave it at that. This series glorifies very nonfamily oriented ideas and values and tries to make them look cool and popular, it definitely needs to be cancelled for the sake of our future generations. Lets not glorify a deceptive, evil deity for a form of family oriented weeknight entertainment! We can do better than that, America, Fox, can’t we? Please

its just a show mr above commentor. I am a christian but i still enjoy the show.

Ditto! I’m a born and still active Catholic; this show is so entertaining- and the writers do a great job adding the humor into the scenes which help highlight the fictional side of it. NOW shows “Troy” should really be comcerned about are those such as “DEXTER” those shows are the type that give sociopaths ideas!!!!

I don’t think so. It’s about changing. Everyone has a little devil and angel inside, this show shows even Lucifer can change. It’s not about religion. It’s my opinion of course!

Ditto! I’m a born and still active Catholic; this show is so entertaining- and the writers do a great job adding the humor into the scenes which help highlight the fictional side of it. NOW shows “Troy” should really be comcerned about are those such as “DEXTER” those shows are the type that give sociopaths ideas!!!!

I love the show. I always believed of Lucifer (real Lucifer) as a “good guy”. I’m glad that someone finally sees the true meaning behind “Lucifer”.

Best show on tv. So weary of contest and reality shows. Lucifer is refreshing#!

I totally love this show too. the main star, Tom Ellis is funny and hot.
This is the only show i look forward to watching every week.

LOVE LOVE this show too

This is a great show and I’m looking forward to every episode to come. Hope it doesn’t get cancelled. I record it and wait for it to come since it came out in season 1 till now.

Lucifier is a very entertaining tv series – adding Tom Welling is a GOOD idea!! Should be renewed for season4

Tom Welling is so cute .He really grew up to be quite a man.He really adds to the show and gives Lucie a real competition if anyone could but hard to upstage the devil.

I just love this show. The entire cast is great — perfect for their parts. This show is a treat.

All episodes have been top notch, but ep.06 and 07 were especially excellent. I hope the series can go 10 seasons at least. It gets all 2 votes in my household.

I love this show. The humor & drama mixture is well done. The different interaction between characters is fun to watch. I hope they do renew the show.

Both my husband and I enjoy this show- we laugh, enjoy the plots and get a kick out of all the characters. The interaction between the major characters is so interesting to see. Interesting tension between Chloe and Lucifer, between Linda/Chloe/Maze, even Maze/Trixie keeps us delighted. Dan and Amenadiel are interesting, Ella is a hoot We cannot wait for more terrific episodes.

On episode 3 on season 3 ..the title of the show was Mr and Mrs Mazikeen Smith. Love the show but found it quite humorous during the part where they were describing places and attacks in Canada. The one in particular was about the bear attacks in Prince Edward Island…lol too funny…that’s because there are no bears on Prince Edward Island…I know because I am a resident . However ..I do really appreciate that you did mention Prince Edward Island..it meant a lot to us …due to the fact that a lot of people don’t know where it is …or… Read more »

My Husband and I ,both, look forward to this show every week. It has humor, action, great stories. Love all the characters. Happy Maze is back. Was a little worried at first. Did not see her in the beginning. I am infatuated with Lucifer. The actors are great. I would love to see Chloe and Lucifer together, but I like the tension and mystery between them. Keep it going . I like that it is on a prime channel at an early time. Keep trying. Maybe a different day. I tell people to watch it always.