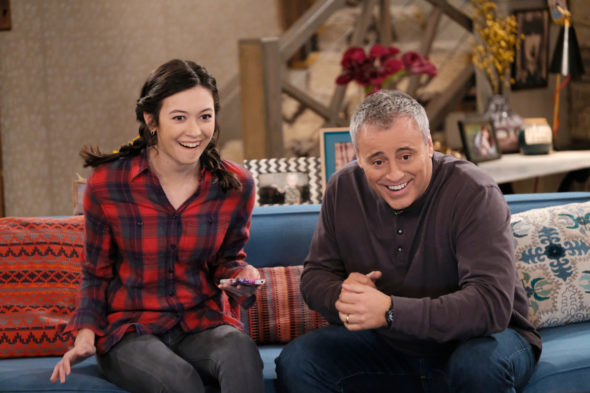 Matt LeBlanc is staying put on the Tiffany Network. CBS has renewed his Man with a Plan TV show for a third season. It seems Adam Burns has yet another year to “nail the job” on the home front.

A CBS sitcom, Man with a Plan stars LeBlanc as a contractor named Adam Burns. The cast also includes Liza Snyder, Kevin Nealon, Stacy Keach, Grace Kaufman, Matthew McCann, Hala Finley, and Matt Cook. When Adam’s wife, Andi (Snyder), returns to work, this old-school dad finds it challenging to up his home game with the kids. Meanwhile, he’s trying to run his business with his brother, Don (Nealon), and put up with bad advice from his father, Joe (Keach).

The second season of Man with a Plan is averaging a 0.98 rating in the 18-49 demographic and 5.79 million viewers. Compared to season one, right now, it is down by nearly 21% and 6%, respectively. Out of the 22 scripted CBS TV shows we’re tracking, it ranks 11th when sorted by its demo ratings, but sinks to the 18th spot in terms of average total viewership.

Deadline has confirmed the Man with a Plan renewal.

What do you think? Do you still enjoy the Man with a Plan TV series? Did you expect CBS to cancel or renew this comedy for season three? Sound off, in the comments.

We LOVE Man With A Plan !!! Looking forward to it being RENEWED for another season and many more !!! Great acting from the whole cast. !!!

Love the show. Will be glad to see it back on. One of the few shows my husband and I I watch together. It’s hilarious!!

I loved that sitcom keep watching for it to start?

enjoyed man without a plan. glad it is returning.

Love Man with a Plan. Lots of laughs every week.

This definitely was one of my favorites as the episodes were very relatable and my wife and I often commented how a lot were spot on what we had gone through or going through with our kids or parents. Happy it is returning and we hope to laugh watching it for many more seasons!

When will Man with a Plan return? I thought it would be starting now in the Fall and nothing! I don’t like any of the programming now on Mondays!

I absolutely agree, Marlene!! The new Monday night lineup is AWFULL!!! I used to look forward to coming home from work and seeing Man With a Plan and Kevin Can Wait (when the wife was still alive, that is). The two new shows ( The Neighborhood and Happy Together) are just NOT cutting it. Can’t wait for Man With a Plan to return!

When will Man with a Plan return to tv?

I love man with a plan

I Love Man with a Plan! This show is so funny, Love All the Actors/ Characters! It’s a Great Family show…. where many You cannot watch with children these days. I hope there are many more seasons to come. People please watch this show…. it’s so Good!!!!

Man with a Plan is entertaining ..
Glad it is renewed for third season.

My husband and I really like Man without A Plan, We enjoy a fun show about real things that happen in a family and of course how they try to handle it.
No bad language, just family fun about life. This show is much needed in my opinion.

I held “Man with a Plan” responsible for “2 Broke Girls” getting cancelled without a proper sendoff last season, and I was hoping that “MwaP” would be cancelled after year two as punishment for forcing “2BG” off the air, yet CBS still renews this? Not happy about this, because “MwaP” isn’t as interesting to me as “2BG” was.

I am really happy they renewed this show . Matt Leblanc and the rest of the cast are so funny. The kids even make me laugh. Thank you CBS.

Brilliant, It’s a great show and perfect for LeBlanc. On a par with American Housewife and one that does actually make you laugh.

Love Man with a plan. So funny really makes me laugh..Happy it is renewed!!!!