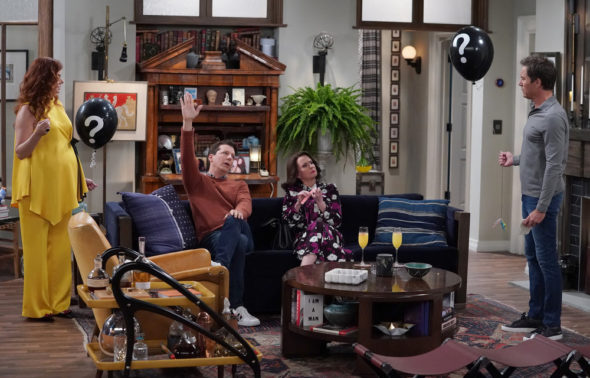 Get ready to say good-bye to Will & Grace for the second time. The series finale for the series is soon approaching, and fans will be able to see the special episode on April 23. It will be proceeded by a retrospective episode hosted by Eric McCormack.

NBC revealed the following about the second finale episode of Will & Grace:

“In the season finale episode, “It’s Time,” with the apartment packed up, Will (Eric McCormack) is determined to not reminisce about his life in the city or his ex, McCoy (guest star Matt Bomer). Grace (Debra Messing), on the verge of giving birth, keeps having false alarms of going into labor. At the behest of Stan, Karen (Megan Mullally) goes to the top of the Statue of Liberty to get closure with her ex-husband. Jack’s (Sean Hayes) dream of taking a bow on a Broadway stage becomes a very real possibility. Minnie Driver and Brian Jordan Alvarez guest star.”

The retrospective will feature clips from past episodes and interviews with stars of the series and other celebrities.

Before the finale, fans will see the special I Love Lucy themed episode on April 9.

What do you think? Are you sad to see Will & Grace end for a second time?

So sad to see Will & Grace end again…Won’t someone pick it up? I think there is a lot left for them to do!

You better believe there is alot more for them to do! BIG MISTAKE, NBC!

I am so sad. I have loved this show from day one. I will miss it. Wish it was continuing!

Me too! This was a brilliant show and I am glad I got to witness it.

So am I. I am beyond disappointed and sad to see this show end,-AGAIN!

Im so sad, the will & grace sitcom is the greatest…

I love the show. Very well written and hilarious.

This show is so well written. I loved it originally, and still do. Why does it have to end??

I will always love Will and Grace. I’ve had some gut busting laughter unlike any other show. It’s been difficult to watch this season because of the “feud no feud”. I will really miss the characters, I love each one. I have reruns. Nothing but love!

I love this show and hate to see it end. It never disappoints. I always have a good laugh with each episode. Each character is unique and they blend together very nicely. I’m sad to see it leave. Again.

Yes, I will be very sad. I hehe enjoyed the comeback of Will and Grace. I hope that maybe they will come back again soon.

This show has been my favorite show since day one. I have seen every episode probably 20 or 30 times each. And this is what I watch every night before I go to bed. Throughout the years if I was sad for some reason or feeling down all I had to do was watch Will and Grace and poof the sadness was gone. I wish it wouldn’t end I wish it would go on forever lol and I do wish you all the best for each character and I loved every character but I will say my favorite what’s Karen… Read more »

So very very sad to see the funniest show there ever was. The actors and actresses were amazingly funny. They made us laugh during so many difficult times. I wish you could keep them on. Their characters made the show. Great talent!!

I refused to buy in to the return. The original finale was really good. They came full circle. Will & Grace reconnected. The straight version of Will gets married to mini-Grace. Jack and Karen live happily ever after.

Yes, I’m Very Very sad to see Will and Grace, come to a end, I’m straight and my Best Friend is Gay and our Friendship goes way back to October of 1986& I’m 65 we’re like brothers . i have Will and Grace on DVD, my blessings to all of you

YES!!! We’ve always been BIG fans!
Loved all the different interactions
between the characters! GREATLY
appreciate all of you for doing this
show! Am actually crying a bit.
Think the show has also moved gay
folks forward towards getting equal
rights. There’s been soooooo many
great stories & twists & turns. FUN!
Abundant blessings to you all.
May all your dreams come true!
Thank you! Thank you! Thank you!

This is 1 of my best comedy shows. I truly hate to see it go. I am forever thankful for all the laughs it brought me…I TRULY WISH IT WOULD STAY A WHILE LONGER…..QUITE A WHILE LONGER AS A MATTER OF FACT!!!
THANK YOU

I love Will and Grace! So sorry to see it end
There needs to be more shows like this on TV!
Best of luck to the cast!! You will be missed❤️