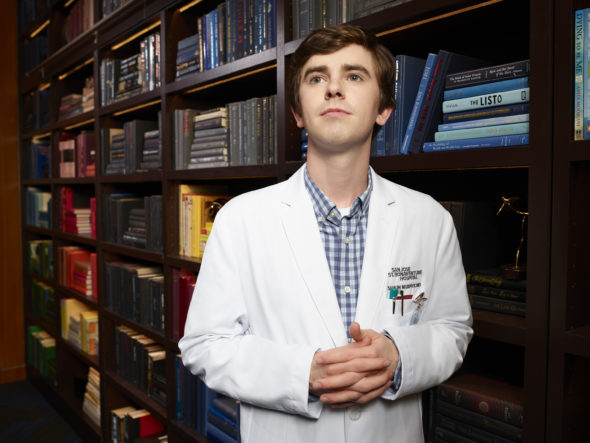 Is the second season of The Good Doctor TV show on ABC just what the doctor ordered? As we all know, the Nielsen ratings typically play a big role in determining whether a TV show like The Good Doctor is cancelled or renewed for season three. Unfortunately, most of us do not live in Nielsen households. Because many viewers feel frustration when their viewing habits and opinions aren’t considered, we’d like to offer you the chance to rate all of the season two episodes of The Good Doctor. *Status update below.

What do you think? Which season two episodes of The Good Doctor TV series do you rate as wonderful, terrible, or somewhere between? Should ABC cancel or renew The Good Doctor for a third season? Don’t forget to vote, and share your thoughts, below.

*2/5/19 update: ABC has renewed The Good Doctor TV show for a third season.

This is an insufferably ridiculous program that needs to go!

One of the best shows on TV, the acting is amazing, genuine, heartfelt! The story lines are convincing, touching, this show makes my day and week!!

Second best show on TV. Have autistic grand daughter. So it is very well acted by Freddie and written by the writers !!!

Dr. Murphy is a totally believable character played by Freddie Highmore. Our son is autistic and I have had the opportunity to work with other autistic young men and this show just rocks the charts. The portrayal of Dr. Shaun Murphy is spot on and a joy to watch. I look forward to each show as it becomes available on Hulu. I am so glad it is being renewed for a third season, I am so hooked on this series.

I loved Season 2. I am thrilled that it will be returning for a 3rd season. I very rarely watch network television, but I am hooked on The Good Doctor. Best series I’ve watched in years.

We liked season 2 even more than season 1. It’s more interesting now. Hope there are many more great seasons!

Trampoline episode was great! Super acting all around. Can’t wait til next season.
Shaun is back!!

DR HAN IS A DISAPPOINTMENT. HE BROKE SHAUN’S SPIRIT AFTER SHAUN SAVED A PATIENT’S LIFE. DR. MELENDEZ SHOULD BE CHIEF. PLEASE KEEP THE SHOW ON BUT CHANGE THE CHIEF OF SURGERY. THANKS

The writers need to understand and maybe put an episode where Shaun cites the ADA and files grievance against Dr. Han to get him to either stand down or put Shaun back into the surgery residency.

The new chief of surgery, criticizes Shaun, yet his people skills aren’t good either.
And Shaun seems smarter than him, doesn’t he?