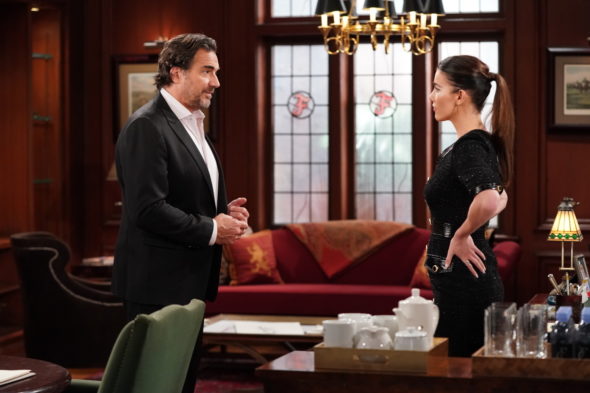 The Bold and the Beautiful may soon head back into production. The daytime soap might return to filming next month, but a lot needs to happen for things to resume.

Per Deadline, the series will return to production if “official safety protocols endorsed by the Hollywood unions, as well as guidelines set by CBS Television City, where the series is shot, the city of Los Angeles and the sate of California” are followed.

The series aired the last of its episodes on April 27 after production had been shut down for six weeks. Currently, viewers of The Bold and the Beautiful are watching repeats grouped together by themes.

What do you think? Are you ready for new episodes of this daytime soap?

They shouldn’t return until August when everyone else mostly will , it would be wrong and not right.
They really don’t understand how serious this is .

I am so ready for all of the soaps to return. The story lines were getting good and then you had to stop because of the virus.

I dont understand why Days of Our Lives and General Hospital haven’t missed an episode and B&B and Young & Restless are airing reruns.

Finally, so a return to normal is on the horizon. I am so ready for some daytime “normal”. Alas, we also want the team to be safe. Have any cast members been affected?

We’ll be so glad to finally see what happened to Flo on Bold and Beautiful . Miss seeing our tv family .

If it will be safe for their return, then YES, I am so ready for the return of Bold and Beautiful.

I’m soooo ready! I want them to be safe though!

Oh yes. I can’t watch the old ones so I’m really ready for them to come back. I want them to be safe though!

Definitely, I would love to have the show continue. I miss all the beautiful people.

Yes, changing up the “couples” – i.e. Brooke with Bill – Liam and Hope finally together and hopefully the series won’t go back to Liam and Hope parting their ways – get rid of Thomas puleese

I can’t wait for B&B to return to production.. Everyone stay safe but hurry back.

I want them all to be safe. But I sure will be happy when they can start up again.

Hell Yes! I can’t wait to see the return of the new episode. It will be very interesting to see when after June 2020 when the new episode finally be seen on CBS either July or August 2020.?

I am so ready for new ones! As long as it’s safe to do!

I’m ready for new episodes. Hope they consider putting Brook and Bill together and Ridge with Shawna, Get some real chemistry. Brooke and Ridge are boring together.