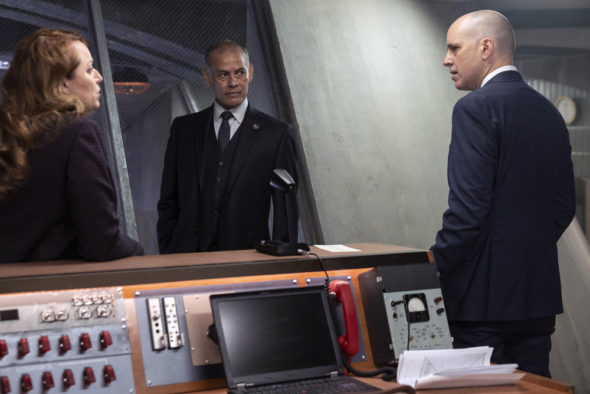 Can Val get the upper hand in the first season of The Endgame TV show on NBC? As we all know, the Nielsen ratings typically play a big role in determining whether a TV show like The Endgame is cancelled or renewed for season two. Unfortunately, most of us do not live in Nielsen households. Because many viewers feel frustrated when their viewing habits and opinions aren’t considered, we invite you to rate all of the first season episodes of The Endgame here. *Status Update Below.

What do you think? Which season one episodes of The Endgame TV series do you rate as wonderful, terrible, or somewhere between? Do you think that The Endgame should be cancelled or renewed for a second season on NBC? Don’t forget to vote, and share your thoughts, below.

Please renew. An interesting commentary. We really enjoyed all the characters and the action.

We loved the show…can’t wait for more.

Great show which kept me guessing. could not wait for next twist. Need for season two to resolve all the mysterious twists and turns; far better in plot and drama then other like shows

OUTSTANDING SHOW!! Kept me on my toes. Couldn’t wait to watch the next episode. Please have a season 2.

The End Game- was one of the best series we have watched. We so need a series 2, please make this happen. Cast are excellent please tell me series 2 is in the making.

OUTSTANDING show!! It is a unique thriller from beginning to end, and far and away better than other network shows on today. Great script and talented cast. This needs to be RENEWED for a second season!! I never watch “crime shows”, but this show has been absolutely riveting!

Great Show! Is so different from the run of the mill cop shows. Please keep this on another season. Start in Fall and go through May!! Great writing and cast.

It kept me on my toes waiting to see who would be next. This is almost as good as Law and Order or Criminal Minds! Keep the seasons coming………

Keeps you on your toes.

One of the best series in years. I strongly encourage renewing it. Please, don’t leave us hanging.

Please bring this back!!!!!

Love the show Endgame we have watched all of them and can’t wait to see the next one. It is a awesome show please have more.