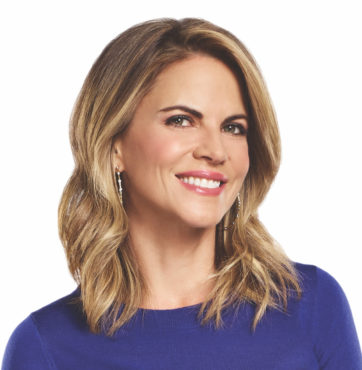 The Talk is adding one more to its panel after a year filled with departures. Sharon Osborne, Eve, Carrie Ann Inaba, and Elaine Welteroth all left the show at some point during season 11. Amanda Kloots, Jerry O’Connell, and Akbar Gbaja-Biamila have since joined the panel, joining longtime host Sheryl Underwood.

It’s now been announced that Natalie Morales is joining the CBS daytime talk show for season 12, just days after announcing her departure from NBC News and Today.

The network revealed more about Morales’ addition in a press release.

“We couldn’t be more excited to have Natalie Morales join the TALK family,” said executive producers Heather Gray and Kristin Matthews. “We have been fans of her and her work for years. Her varied skillset and versatility are a great addition to our talented panel. Natalie’s intelligence, passion and enthusiasm always shine through in all her work, and we are fortunate to have her on the team. In addition to her role as an exceptional broadcaster, we believe her perspective as a wife and mother will provide a special connection with our audience.”

“It’s an extraordinary opportunity to be joining this team at THE TALK,” said Morales. “I love the new energy and direction and couldn’t be more excited to join Sheryl, Amanda, Jerry and Akbar. I’m looking forward to many good times while talking about the days’ topics, and I can’t wait to get going.”

Most recently, Morales was the West Coast anchor of NBC News’ Today, correspondent for Dateline NBC, and anchor of Behind Closed Doors with Natalie Morales. She previously served as host of Access and co-host of Access Live, as well as news anchor of Today, where she co-hosted the show’s third hour. Morales joined Today in 2006 as a national correspondent and reported across all of NBCUniversal News’ platforms, including NBC Nightly News with Lester Holt and MSNBC.

In a “Today” first, Morales followed 20 children from the class of 2020 – all of whom were born a year after 9/11 – from their first day of kindergarten to graduation, amid a global pandemic nonetheless. In addition to hosting “At Home with Natalie,” Morales contributed to several major breaking news stories, including the sexual harassment scandals, the 2017 Las Vegas massacre, the 2013 Boston Marathon Bombing, and the rescue of the Chilean Miners in 2010 (coverage that was seen worldwide and recognized with a 2010 National Headliner Award). In August 2008, Morales had the exclusive jailhouse interview with the infamous Clark Rockefeller. Her other notable reports include the 2009 presidential inauguration; Hurricane Sandy in 2012 and Hurricane Katrina in 2005; the 2004 Indian Ocean tsunami; the death of Pope John Paul II in 2005; and the election of Pope Francis in 2013. She also reported on the royal wedding in 2011 and the birth of Prince George in 2013.

As a part of the Shine a Light campaign in 2014, Morales ran in the Boston Marathon and raised over $70,000 for victims of the 2013 bombing. Morales has won three Daytime Emmy Awards as part of “Today’s” recognition as the best morning news program. She won a Robert F. Kennedy Award in international journalism for her report on Honduran lobster divers for “Rock Center with Brian Williams” in June 2013. She has won three Gracie Awards, one for Outstanding Series for her “Dateline NBC” special, “My Kid Would Never,” and two for her reporting in 2016 and 2017.

What do you think? Are you excited to see Morales on The Talk on CBS daytime?

Good for her for making a move. NBC buried her shortly after Matt Lauer left. I hope she does well, but I’m not sure the show can be helped.