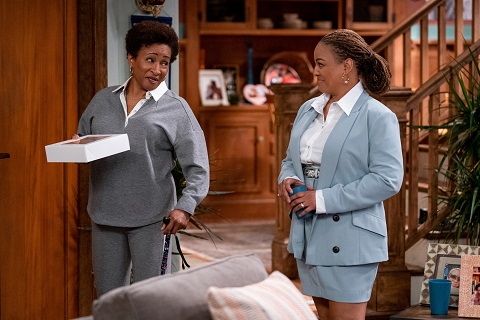 The Upshaws is returning soon with the remaining episodes of its second season (aka part three). Netflix announced that the comedy series will return with eight more installments on February 16th. The streaming service has already renewed the sitcom for a third season.

Netflix revealed more about the series’ return in a press release.

They are taking big swings and, sometimes, missing even bigger… good thing they have each other, right? The Upshaws are finally back! Part 3 streaming February 16, only on Netflix.

Bennie Upshaw (Mike Epps), the head of a Black working-class family in Indianapolis, is a charming, well-intentioned mechanic and lifelong mess just trying his best to step up and care for his family – wife Regina (Kim Fields), their two young daughters (Khali Spraggins, Journey Christine) and firstborn son (Jermelle Simon), the teenage son (Diamond Lyons) he fathered with another woman (Gabrielle Dennis) — and tolerate his sardonic sister-in-law (Wanda Sykes), all without a blueprint for success.

But the Upshaws are determined to make it work, and make it to the next level, together. The Upshaws continue to ride life’s ups and downs, including new jobs, bigger dreams, health struggles, and some major life surprises but still hang on with the love that comes with family.

Check out a trailer for The Upshaws Part 3 below.

What do you think? Are you a fan of The Upshaws? Do you plan to check out the return of the series on Netflix next month?

Love this show so funny and look forward to seeing it rest of the season so great cast A Facts of life actress the best with Wanda Styles comedian. Always have the best lines on this show.