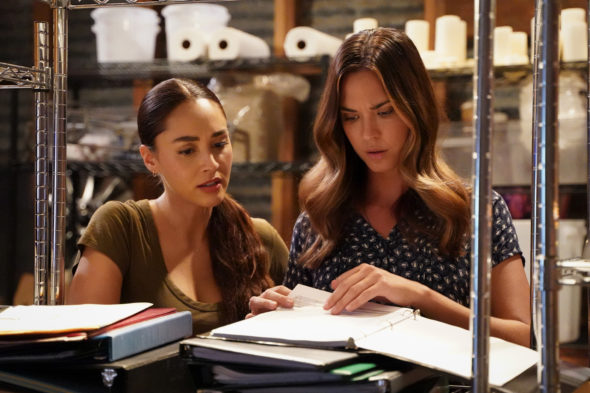 Walker just returned to The CW with its second season earlier this week, and there is already a big change coming to the series. Lindsey Morgan (above, left) has announced that she is leaving the drama series.

It was revealed that her character had gone undercover on a case during the season’s premiere, and the actress will depart the series at some point during the current season.

The actress plays Walker’s partner,  Micki Ramirez, as one of the first female rangers in Texas. Her departure from the series marks her exit from the network as well. She last appeared on The 100 during its seven-season run before joining Walker.

Morgan said the following about her exit from the series, per Variety:

“After much thoughtful consideration and introspection, I have made the incredibly difficult decision to step away from my role as Micki Ramirez on Walker for personal reasons, and I am eternally grateful to have the support of the producers, CBS Studios and The CW in allowing me to do so. The opportunity to play Micki has truly been a blessing as has working alongside the incredible cast and crew of this terrific series. Please know that I will continue to root for my TV family and wish them all the best.”

The CW also released a statement about her exit:

“We respect and support Lindsey Morgan’s decision to step away from her role as a series regular on Walker and wish her only the best. She is a tremendously talented actress who will certainly be missed, and we will, of course, leave the door open for “Micki” to return.”

What do you think? Are you surprised by the exit of Morgan from Walker? Are you watching season two of the series on The CW?

Walker without martial art is NOT walker. I love the orginal becoz it kick-a** but this reboot is better off called something else. Plus Walker character is for me the dumbest acting ever – with his stammering and no clue of what is going on. Saving grace is that his supporting cast always got his back no matter how blur or dumb he may be.

I thought she was the best one on the show! They should have renamed it after her charicter. I won’t watch anymore. Jared over acts way to much.

So if they kill her off that means Walker can obsess about her murder for the entire season, just like he obsessed about his wife’s death the entire first season. Who are they going to kill off in the third season so they can keep this plot device going?

I will really miss her on Walker. She brought a lot to the show. Good luck to her.

Walker “STARING Jared Padalecki and Lindsey Morgan” is as AWESOME AS WALKER:TEXAS RANGER STARING CHUCK NORRIS !!!!!!!!!! WOW it is so bad Lindsey Morgan is quitting she is a huge part of the show so will Walkers daughter take her place ??? Now that would be awesome then his son would join in for a family WALKET TV SHOW YESSSSSSSSSSSSS !!!!!!!

We love this show! Sad to hear that Micki is leaving. But I’m sure they’ll find a good replacement.

Good cancelled Chuck Norris is the best actor no one compare this remake crap terrible worst crime tv show ever seen get rid of this.

Walker feels like it got a season 2 because CW had no other options during the Pandemic. Sounds like a good move for the actress. Probably not getting a Season 3

Loved her on The 100. These CW shows are just tanking in the ratings. Might be a good time to jump if something else is out there for her.