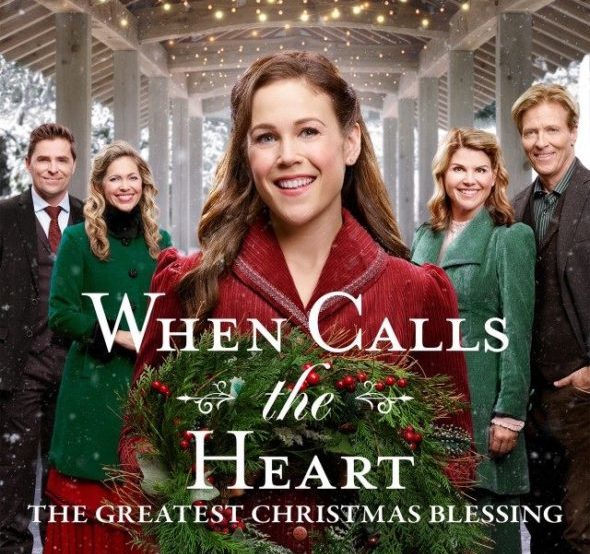 Hallmark has ordered When Hope Calls, a spin-off series based on Hallmark Channel’s When Calls the Heart TV show (which returns on February 24th). The new series will launch sometime in August 2019 and revolve around characters introduced in the recent When Calls the Heart: The Greatest Christmas Blessing movie.

If you want to watch the new series, it sounds like you’ll need to subscribe to the Hallmark Movies Now streaming service. The service costs $6 a month and subscribers have access to Hallmark movies and TV series like Cedar Cove, Heartland, Chesapeake Shores, and Signed, Sealed, Delivered. Interestingly, it doesn’t appear that the When Calls the Heart series is available through the service.

Here’s the announcement about When Hope Calls:

“‘When Hope Calls’ embodies the same heartfelt themes of community, family and faith that have resonated so strongly with ‘When Calls the Heart’ fans over the past six years. This is another series that viewers are sure to treasure,” said Michelle Vicary, Executive Vice President, Programming and Network Publicity, Crown Media Family Networks. “The series rounds out the experience we are offering loyal viewers in 2019. Along with our linear networks, publishing and podcast platforms, our SVOD service is another way to enjoy the original content our brand is known for,” Vicary concluded.

“When Hope Calls” follows Lillian (Morgan Kohan) and Grace (Jocelyn Hudon), sisters who were orphaned and raised very differently, as they reunite as adults and open an orphanage in a small Northwest town in the early 1900s. The town and its people are on the cusp of change, transitioning from the simple times of the horse and buggy to the more modern times of cars and technology. The characters were introduced in the 2018 ratings record-breaker, “When Calls the Heart: The Greatest Christmas Blessing.”

Hallmark Movies Now launched in October 2017. Subscribers to the service have access to a robust library of content not available on Crown Media Family Network’s linear channels, with new programming available every week. Hallmark Movies Now is available on iOS, Android, Roku and Amazon Fire, among other devices. The SVOD service is also now available over the Internet on both Comcast’s Xfinity X1 and Cox’s Contour platforms.

What do you think? Do you plan to check out the When Hope Calls series if it means subscribing to the Hallmark Movies Now service to see it? Are you already a subscriber? Do you like it?

Probably not. As TV shows are trying to capture more money by providing streaming services if they remove them from cable/satellite etc then no. I can’t afford to subscribe to every streaming service that comes along. Disney is going to push to do the same thing so you have netflix, disney (although I probably won’t subscribe), DC Universe, you see how this is going?

We are waiting anxiously for the new season of When Call the Heart. Our very favorite tv series . We didn’t know about it but found it on Netflix. We binged watched the first 5 years laughing and crying loving every minute of Elizabeth and Mounty Jack and all the wonderful characters. Can’t wait to see the new episodes and the spinoff! Thank you for a movie that the whole family can really enjoy without worrying about content language or sex scenes. Real love and real faith. This is the kind of series that’s for everyone! God bless and continue… Read more »

I think it is a shame that a network uses it programming to almost force people to subscribe to their pay network to follow a show that once was free. I am sorry to say that you will lose two viewers. I am sure that this may not affect your decision but I just wanted to voice my opinion on this. We dropped cable to get channels we watched for a lower price. I hope this passes the protocol of the things I could or could not say

If I have to subscribe to Hallmark movies now, then no I’m not watching When Hope Calls

Not watching if I have to subscribe to Hallmark movies now

Movies Now are all re-runs

No, I will not subscribe to another channel. My cable bill is at budget now.

I will not be subscribing, I am on a fixed income and already pay too much for television. I thoroughly enjoy watching HM and HMM&M and frequently watch with my grandchildren.

No. Would love to tune in but I’m not willing to add another fee to my already pricey tv service.

No, I’m offended that I already support their other networks and they want me to pay more money to watch something else. I’m going to take a hard pass on this one.

I am living in the UK and have seen this marvellous series on our tv screens about a couple of years back. I loved it !! Please re-consider getting the contract back again witb British Television I didn’t see Jack and Elizabeth get married and I want to and the follow up. I cannot get the Hallmark channel!
Thank you.

No I will not get Hallmark Movies Now to watch When Hope Calls. My bill is too high already so I can’t afford it. I can barely afford the cable subscription.

Absolutely! Looking forward to watching it!

Not sure I will subscribe. I am already paying too much for TV services on fixed income,. I already pay extra for HMM&M, & I enjoy the regular HM channel.

No probably will not since I already pay for Hallmark, Hallmark Movies and Mysteries and Hall Mark Drama