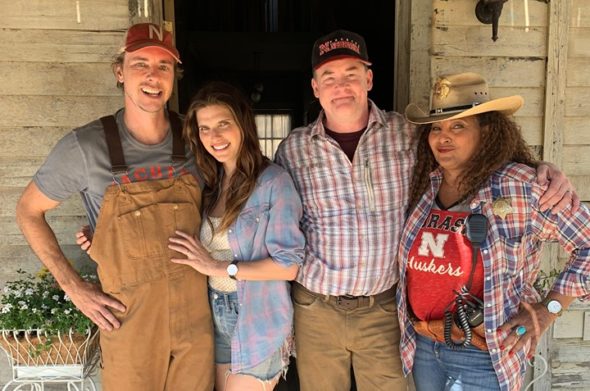 Can Mike and Rio truly feel at home down on the farm? Has the Bless This Mess TV show been cancelled or renewed for a third season on ABC? The television vulture is watching all the latest cancellation and renewal news, so this page is the place to track the status of Bless This Mess, season three. Bookmark it, or subscribe for the latest updates. Remember, the television vulture is watching your shows. Are you?

Airing on the ABC television network, Bless This Mess stars Lake Bell, Dax Shepard, Ed Begley Jr., Pam Grier, JT Neal, David Koechner, and Madison Curry. In the series, young newlyweds Mike and Rio Levine-Young (Shepard and Bell) give up their lives in New York City to run a farm in Nebraska that Mike’s great-aunt left to him. Once in cornhusker country, it doesn’t take them too long to figure out that living a simple life requires a lot of hard work.

The second season of Bless This Mess averaged a 0.67 rating in the 18-49 demographic and 3.64 million viewers. Compared to season one, that’s even in the demo and up by 9%, respectively. Find out how Bless This Mess stacks up against other ABC TV shows.

Will ABC cancel or renew Bless This Mess for season three? The ratings are up, year-to-year, but I can’t ignore that the show loses a large portion of its lead-in’s audience. I think it will be renewed but would be curious to see how another show would perform in the same timeslot. I’ll update this page with breaking developments. Subscribe for free alerts on Bless This Mess cancellation or renewal news.

What do you think? Were you hoping that the Bless This Mess TV show would be renewed for a third season? Are you sorry that ABC cancelled this TV series, instead?

ITS REAL AND DOWN TO EARTH, NOT ONE OF THOSE SILLY ONE LINER SHOWS WITH A LAUGH TRACK.

I’m shocked. This was that fun escape we all needed every week. It was our favorite for the past two seasons. I seriously would love to know how they take the polls that make these decisions. Most of our friends love it too but I guess we must not be in the right demographic. Please please will some other network pick it up?!

I really enjoy the show. All the character’s are really good and I feel they are growing. Please renew this show.

I am also very disappointed in the canceling of this show. My husband and I looked forward to it weekly. Please bring it back.

Noooooo! This was the ONLY tv show that me and my husband both mutually loved! My husband does not watch any primetime tv shows at all. That is until I turned him on to Bless This Mess! On the Tuesdays that we were not home, we would faithfully record it. Please, please, please reconsider your decision to cancel this show. It was one of the wittiest shows we have enjoyed watching in such a long time. Please give it one more chance.

I’m disappointed that Bless This Mess isn’t getting a third season. I found there characters delightful, the writing witty and it never ceased to give me a laugh.
I can’t help but wonder why ABC is canceling shoes like Bless, and The Kids Are Alright. (Another fave of mine) when other shoes that lag behind them in the ratings get renewed.

This was one of our favorite comedy shows for us and our older children. Well written, fun quirky characters and great acting! Very disappointed that it is being dropped. We always watched this from our YouTubeTv library and not live. I wonder how that impacts their rating stats. Hope this gets picked up by another network.

This show is one of the best comedies with some of the best roles. It is quirky, clever, laugh-out-loud funny. I’m amazed at the lame shows that were renewed. Any chance it can find a new home?

I am so disappointed. Why do all the good shows get cancelled?. This was a funny though somewhat quirky show. We looked foeward to it. Please bring it back

I love this show, it is an amazing cast extremely fresh and has a heartwarming theme. The comedy is great
It’s different and a new feel. Canceling it would be a bad idea. All we have now are murder mysteries and a bunch of crap.

We loved this show. I’m very upset it ended after only two seasons. They didn’t even give a chance.

I am so disappointed in ABC for canceling ‘Bless This Mess’! This show is so hilarious and I always look forward to watching it every Tuesday. Please bring this show back!! I love all the characters in the show. They’re so funny and down-to-earth.

Super disappointed this won’t be coming back!!! I swear it was written off my own life on my family’s farm!! What can we do to bring it back??? My husband is overseas and it is seriously the only thing he has that reminds him of home and is helping him get thru being over there!!!!