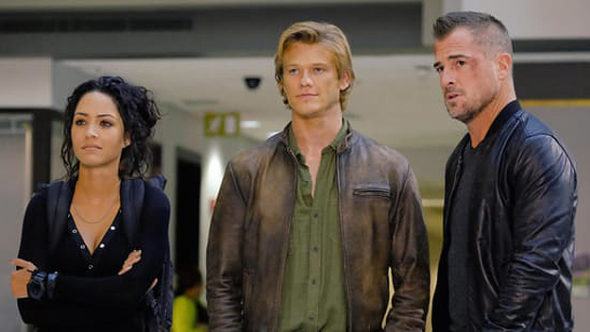 Is somebody leaving the MacGyver team? TVLine reports star George Eads may be leaving the CBS TV show.

According to TVLine, Eads will appear in at least one more episode of MacGyver’s third season, but it is unclear if the actor will return to the CBS series.

Earlier, we reported that Eads would be leaving the show after the current season but no reason was given. Now, TVLine says the actor asked to be released from his contract after an incident on set.

As of reporting, we know Eads will appear in the February 1st episode of MacGyver. See below for a synopsis:

An international crime boss offers Matty a deal she can’t refuse – he’ll surrender himself into her custody if he’s allowed to return to the United States to watch his daughter walk down the aisle. MacGyver and team crash the wedding to ensure the crime lord doesn’t run, only to discover they’re not the only ones lying in wait at the event.”

What do you think? Do you watch MacGyver? Will you keep watching if Eads leaves?

No, not w/o George Eads…. the episodes that have aired wirhiut him weren’t aa good….. so guess I have a Blindspot now!

I hope he stays. I love his character. No one can take George’s place.

I like his character, but I’ll still watch if he leaves. His character isn’t SO strong that I’d stop watching just because he left.

No I would not continue to watch.

I think Eads is a great character at thr show, without him it wouldn’t be the same. Im a huge fan of the tv series and its very disappointing for me this news. I hope he changes his mind and stay in the show. Please!!!!

I will be elated if he leaves the show…I think he drags it down….can’t stand his character his absence will be an improvement…That is if it’s even renewed..

We like and watch the show. It’s a little on the light side with some humor. We record it and watch it on nights when it fits our mood that night. Eads brings both humor and some action. We’d like to keep him on the show. He’s enjoyable.

Haven’t watched the new series but was a huge fan of the original. Mac and Jack go together like Mac n Cheese

I Love eads on the show. He is one of the reason I watch MacGyver.

He leaves…i leave. I find bosar more irritating than jack like a knock off chris tucker or a poor imitation of kevin hart. Jack is the only man on the show after gyver being all/only brains.

I disagree about Eads, I won’t miss him at all. His character has become increasingly irritating and obnoxious the show is almost unbearable. (Not that I fault him for it maybe it is the writing for his character I find so bad). Besides the cast has become more sophisticated and he really looks clunky and out of place. Good luck to him and the show will be much improved.

Yes I watch MacGyver and if Edes leaves the show I will still watch it, even though he will be missed very much.

The show will suffer if he leaves. How sad that he has made that decision, apparently.

I read he was fired. Big mistake. Look what happened when Riggs was fired from Lethal Weapon.