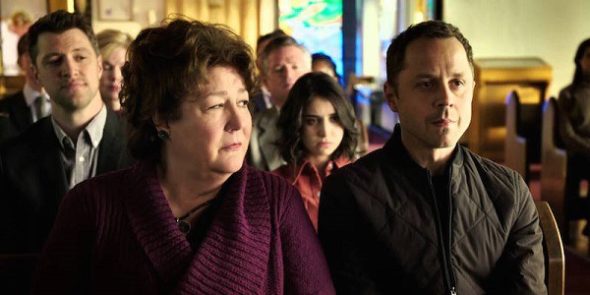 It looks like Marius’ con is over. Amazon has cancelled the Sneaky Pete TV show so there won’t be a fourth season of the drama series that was created by Bryan Cranston and David Shore.

An Amazon Prime Video crime drama, Sneaky Pete stars Giovanni Ribisi, Marin Ireland, Shane McRae, Libe Barer, Michael Drayer, Peter Gerety, Margo Martindale, Ethan Embry, and Cranston. The series centers on a con artist named Marius Josipović (Ribisi). After being released from prison, Marius has to go on the run from Vince Lonigan (Cranston), a vicious criminal he once robbed. Fresh out of options, Marius assumes the identity of his former cellmate, Pete Murphy (Embry) and, as a cover, involves himself with Pete’s estranged family.

Sneaky Pete started as a CBS pilot. The network passed on a series commitment but Amazon picked it up instead. Production moved from New York to California for season three with more than $9.2 million in California tax credits.

The third season of Sneaky Pete (including the defacto series finale) was released on Amazon on May 10th of this year. The series ran for 30 episodes in total.

What do you think? Did you like the Sneaky Pete TV show? Should it have been cancelled or renewed for a fourth season?

Bring back for more and more sneaky Pete. Three seasons is just getting the show started. I think there is plenty more that the writers can come up with. This show was one of the reasons I renewed my prime membership, lol,,,,,,,BRING PETE BACK PLEASE!!!;;

Renew it, its fun and not like all the other shows that just copy each other

One of the best shows ever. One more season is all we need.

I absolutely LOVE this show! It is so well written with characters you really care about. They should bring it back again and again, imo!

The show had run its course. It jumped the shark and deserved to die quietly

How could this not be great? Actors like Giovanni Ribisi, Margo Martindale, Brian Cranston, and so many more amazing ones. Fresh characters and plot which we don’t often see. Although the title is fitting, it’s the only thing I didn’t like about the series. Who are the people who make these crazy cancellation decisions and leave us to watch the likes of The Goldbergs, The Bachelorette, and Dr. Pimple Popper?

This was the closest Amazon has come to matching The Ozarks. It was immersive, fascinating, and suspenseful. It’s such a disappointment that this show was cancelled. Giovanni Ribisi is there perfect confidence man. This show really deserved a proper finale. Bring it back!

The Ozarks is on my list of most anticipated shows that I’m waiting for. I’d love to see another season of Sneeky Pete though.

I really enjoyed this series & although I will miss the characters the ending was superb. Kudos to the cast & writers!

We really enjoy this show. Ots needs at least a season four@ bring it back!

I love this show. At least bring it back for a fourth – and final (if it has to be) – season to wrap everything up.

Loved the show, watched the entire 30 in 5 days, looking forward to season 4 when I looked for it and they say it is cancelled. This show is AWESOME bring it back.