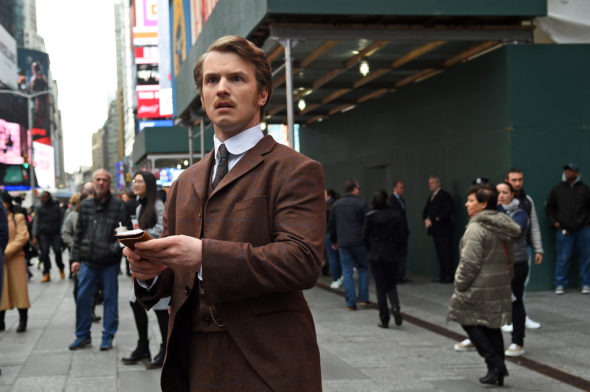 The drama follows a young H.G. Wells (Freddie Stroma) as he travels to the present in pursuit of of the brilliant and engaging surgeon, Dr. John Stevenson (Josh Bowman) a.k.a. “Jack the Ripper.” The cast also includes Génesis Rodríguez, Nicole Ari Parker, Will Chase, Jordan Sparks, and Jennifer Ferrin.

Time After Time premiered on March 5th to very low ratings. The show’s debut received a 0.65 rating in the 18-49 demo and only 2.54 million viewers. The series’ numbers have only declined from there. Only five episodes in, the drama is averaging a 0.54 rating in the 18-49 demo and 2.20 million viewers, making it one of the network’s lowest-rated series for the 2016-2017 season.

While ABC has not officially announced a cancellation (networks rarely do), it seems certain that it’s cancelled, given the terrible ratings and the show being pulled from the schedule. Match Game will air in place of Time After Time beginning April 2nd. There are currently no plans to air the remaining installments.

What do you think? Have you seen Time After Time? Do you think it should have been cancelled?

No I want more!

Ths was a really great show. They didnt really give it a chance and very little advertising… come on… stop getting rid of all the shows i watch.

The show was imaginative and we looked forward to watching it every week. Networks give up to quickly on shows, sometimes they just need to gain a following.

We enjoyed it. Something different. Always too quick to let a show go.

I really enjoyed this series. I wish they would show at least one full season. Bring it back, please!!

So upset, nothing like getting into a series and left hanging only 5 episodes in!!!!!

This was a great show. They should have kept going with it. It was completely differently. My husband and I loved it. It would have been good if they have given it a real chance. Hopefully match game fails so they see what a mistake they made. Bring back time after time.

Really enjoyed watching this show. Completely was devastated we viewers were left wondering & asking – WHY & HOW the network could just stop cold. Fans like me who’d​ anxiously be anticipating & agonizing that we’d have to wait an entire week to see this show that was great to watch. I want to stress that I’d be excited enough as to count the days til the new episode aired. That’s how much I loved watching this show. Then the network decided to cancel this incredible show leaving viewers absolutely NO way of getting to view the episodes that didn’t… Read more »

NO! This is a GREAT show. They did the same thing with FOREVER. Both shows had it all: Romance, Suspense, Humor, Action and Sci-Fi. What’s wrong with ABC?

I was looking forward to the next episode… I think it should have a second chance. I believe that the way it was promoted wasn’t too convincing. I just saw the first five episode this week. I wish I would’ve known more about the show. I would’ve watched when it aired.

This was a preety decent show with a story that started to look promising as those few episodes they aired went on. At least they could have ended the season so and to get some kind of closure to the story instead of leaving it hanging. Im not suprised that people go to Netflix and other online services more now days when shows on tv are not even given a chance. At this rate soon TV shows will no longer be a thing and this is sad, but they should adapt to the new media outlets

I really loved the show. Why is it cancelled and replaced with boring not interesting silly game show…