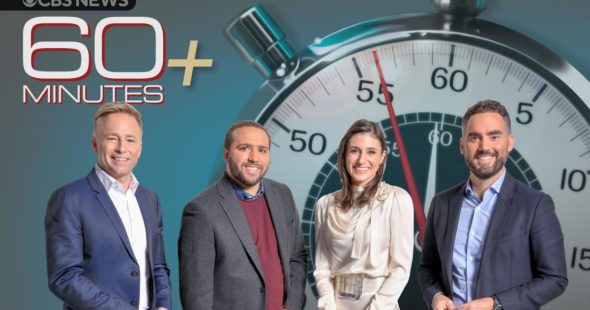 60 Minutes is expanding and a new series, 60 Minutes+, is coming to the Paramount+ streaming service. Viewers will see the first three episodes of the news program when the service launches on March 4th and new episodes will be released weekly after that. Jonathan Blakely has been named executive producer.

Paramount+ revealed more about 60 Minutes+ in a press release.

“60 MINUTES+, a streaming version of the most-watched news program in America, will premiere on Paramount+ with three new episodes on Thursday, March 4. Jonathan Blakely has been named the news program’s executive producer and its content will originate from the 60 MINUTES production team in New York. The series will offer a new episode each week.

60 MINUTES+ is a new form of 60 MINUTES featuring longer segments reported by a new team of correspondents. Just like the flagship, the new version will reveal the stories behind the news through original reporting and captivating interviews conducted by some of the best journalists in the world – the recipe that makes 60 MINUTES television’s longest running hit. “I’m proud to be working with such a group of talented journalists bringing the 60 MINUTES tradition to a new platform,” said Blakely. “Laurie, Wesley, Enrique, Seth and our entire team are going to make 60 MINUTES+ a standout program for a new and growing audience.”

The premiere will feature correspondent Laurie Segall’s interview with Jacob Chansley, the QAnon “shaman,” correspondent Enrique Acevedo’s profile of J Balvin, including a visit with the Raggaeton music star’s family in Medellin, Colombia, and a climate change segment from the Alps, where correspondent Seth Doane reports on the dangers of shrinking glaciers.

The program’s other correspondent is Wesley Lowery, who with Segall, Acevedo and Doane, reported for 60 in 6, a program with shorter segments that launched on the Quibi platform last year.

Lowery’s work for that program included original reporting on the George Floyd killing and the Jacob Blake shooting by police. Before that, he distinguished himself at the Washington Post as one of the country’s foremost journalists on race, law enforcement and justice. Lowery won a Pulitzer Prize for his work on the Post’s “Fatal Force” project and is a published author. He also has appeared on CNN as a political contributor; his reporting and writing have been featured in The New York Times, The Boston Globe and The Wall Street Journal, among other outlets.

Segall, a Gracie and EPPY-award winning tech industry journalist, broadened her scope last year with stories on the right-wing Boogaloo Bois and a fascinating look inside a QAnon convention. She first gained notice by identifying and interviewing founders of disruptive tech companies and examining their impact on society. Segall founded Dot Dot Dot, a news and entertainment company that explores the intersection of tech and humanity. Previously, she was CNN’s senior technology correspondent and the editor-at-large for CNN Tech.

Acevedo, an Emmy award winning journalist, has reported in English and in Spanish from conflict zones, disasters and world news events, including the drug wars in his native Mexico, the AIDS epidemic in Africa, the Boston Marathon bombing and the Sandy Hook Elementary School shooting. He was the anchor of the Spanish language news channel Noticiero Univsion’s evening newscast for nearly 10 years. Acevedo also reported for NBC Telemundo and the Latin American media giant Televisa. For 60 in 6, he examined the pandemic’s effect on the already dangerous lives of migrants trying to reach the U.S.

Doane is a Rome-based correspondent for CBS News covering the Vatican and responsible for coverage of the wider region from earthquakes in Italy, to terrorist attacks in France, to the refugee and migrant crisis in the waters of the Mediterranean. The Peabody Award-winning journalist was previously based in Beijing as CBS News’ Asia correspondent and has traveled to 70 countries filing stories from the front lines of the wars in Afghanistan and Iraq, natural disasters and Darfur. Doane memorably reported on his own program about his colleagues’ and his own fight with the COVID virus in New York last year, where nearly every member of the “60 in 6” team became infected in what was maybe the first identified COVID cluster in New York City.

Blakely, who helped launch “60 in 6” as its senior producer, has demonstrated his talent in the studio and the field over his nine years at CBS News, including producing stories overseas and supervising and reporting long term features and investigative reports. His work has been featured on the CBS EVENING NEWS, CBS THIS MORNING and CBSN, the News division’s 24/7 digital streaming service. In 2019, he initiated and supervised an investigation into more than 150 police departments in the U.S. The report sought results from the increase in officer anti-bias training spurred by the police shooting of a black teenager in Ferguson, Mo., in 2014. Blakely will continue to work with 60 MINUTES Executive Producer Bill Owens, Executive Editor Tanya Simon and the Sunday broadcast’s senior editors as he leads this new team of reporters and producers.”

What do you think? Are you a fan of 60 Minutes? Will you watch the new 60 Minutes+ TV series on Paramount+ next month?