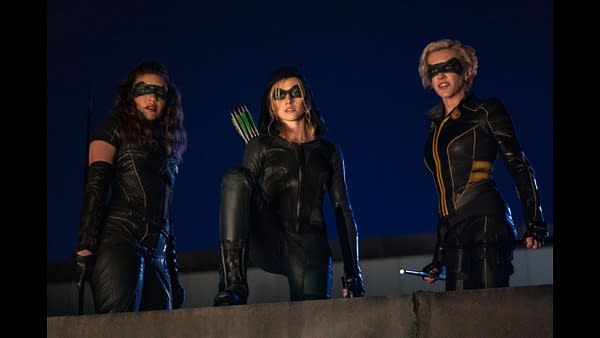 The CW has made a decision about one of two potential that had backdoor pilots last year. An Arrow spin-off and a prequel to The 100 have been in the talking stages for months, and fans have wondered if the pilots would move forward.

Deadline has now revealed that Green Arrow and the Canaries is not moving forward. However, The 100 prequel still has a chance to air. In fact, a possible deal could see the series air on both The CW and HBO Max. The options for both casts expired last year.

Katherine McNamara, Katie Cassidy, and Juliana Harkavy were set to star in the new Arrow spin-off, which would follow Oliver Queen’s daughter as she took on the Green Arrow title herself. McNamara is currently appearing on The Stand on CBS All Access.

New and returning shows connected to the “Arrowverse” will begin airing on The CW later this month.

What do you think? Are you surprised that The CW is not moving forward with the Arrow spin-off? Do you plan to watch the prequel series to The 100 if it gets a greenlight?

Come on! Everybody sign up on these petitions, please.
https://www.change.org/search?q=Green%20Arrow%20and%20the%20Canaries

Agreed with you totally understand you. So many superhero in dc universe it amazing story green arrow apart of justice league and America comic book series love it those story don’t think seen any besides arrow tv show character canary.

i am so glad tired of this topic getting old watch long time. love Arrow first couple years now that ended shame very good show. Nothing else besides The Flash two best superhero ever.

I can’t believe they passed on this all of them are great acrtresses.