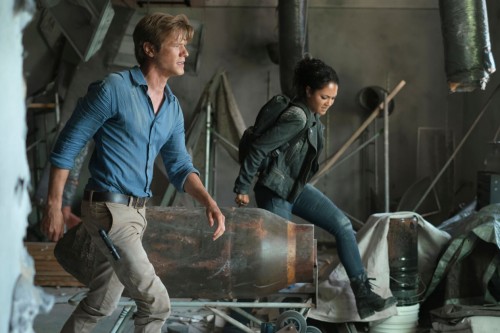 MacGyver will be back in action for season five. CBS just announced they’ve renewed the adventure TV show for the 2020-21 broadcast season.

The MacGyver reboot series centers on Angus “Mac” MacGyver (Lucas Till), a 20-something adventurer. Mac creates a secret organization within the US government. There, he uses his vast scientific knowledge and an extraordinary talent for unconventional problem-solving to save lives.  The cast also includes Tristin Mays, Justin Hires, Meredith Eaton, Levy Tran, and Henry Ian Cusick.

The fourth season of MacGyver averages a 0.67 rating in the 18-49 demographic and 6.11 million viewers. Compared to season three, that’s down by 5% in the demo and even in viewership.

MacGyver is a middle-of-the-road performer when compared to the ratings of other CBS TV shows in the 2019-20 season. The fourth season finale airs on Friday, May 8th.

What do you think? Do you watch MacGyver on CBS? Will you watch season five?

I love MacGyver! Watch it every week!! Can’t wait for season 5

I enjoy the show but think it gone downhill since George Eads left. I think season 5 will be the last.

Glad to hear it was brought back for another season. I watch it all the time!

I love the show! Please keep it on!

Yes, I Love the show please bring it back, It is refreshing.. I will miss George Eads but still love watching Lucas Til.

I love the show keep it on CBS thank you

Love the show. Will watch it as long as it is on TV,

I love the show MacGyver. It’s really nice to wath on Friday nights. I’m happy it’s coming back. Thank you.

When is season 5 of macgyver coming back

Love he Macgyver show! Hope it continues! BringJack back

Yep I watch it, it’s gotten better since the beginning.

Please keep Mac on air. My son & I watch every Friday night. We both love it and look forward to each new episode.

Not many shows of this type on TV. Exciting,good clean action with good story lines. My whole family enjoy watching it every week. We each have our own favourte actor

Please continue to air MacGyver. It is a show that is safe for children to watch and the whole family to enjoy!

I am a MacGyver fan. It is wonderful to have a show to watch that has excellent characters and action without profanity and sex scenes every 5 seconds. It is a family friendly show that is safe for children to watch and adults to enjoy. Please keep it on the air.