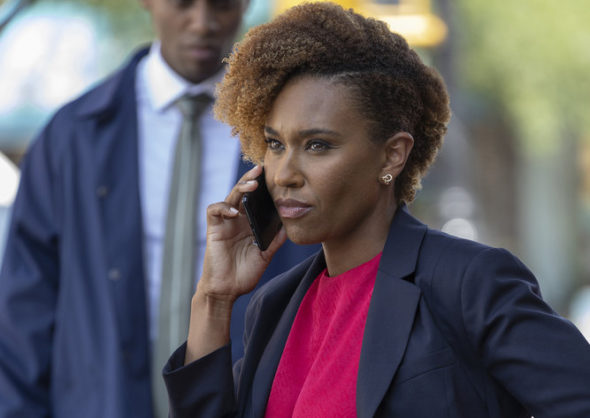 Val won’t have to battle Elena in the 2022-23 television season. NBC has cancelled The Endgame so, there won’t be a second year. The low-rated first season of 10 episodes finished airing on May 2nd.

Airing on Monday nights, the first season of The Endgame averaged a 0.27 rating in the 18-49 demographic and 1.88 million viewers in the live+same day ratings (including DVR playback through 3:00 AM). While these numbers don’t include further delayed or streaming viewing, they are a very good indicator of how a show is performing, especially when compared to others on the same channel. It’s one of NBC’s lowest-rated series in the traditional ratings. In the live+7 day ratings, the show averaged a 0.40 demo and 3.66 million when factoring in the delayed viewing.

What do you think? Have you kept up with The Endgame TV show? Are you sorry to hear that this series has been cancelled so there won’t be a second season on NBC?

It seems good shows like The Endgame that make you think are canceled. While many mindless shows keep getting renewed.

Thought I really found a good show on NBC man I was watching it like crazy which is unusual for me staying up late just to see the next episode until I had to fall out to sleep. And now I found out there is no season two so disappointing I was so entrenched in the characters. Please bring it back or some other network please pick it up it was great! So entertaining,, thought-provoking I just want to see more

End Game is an amazing show and far better than many other crap shows still on the air. Please renew it ! Thank you

Endgame was a refreshing drama. Intelligent and thought-provoking, it is a shame to see it cancelled! Please at least wrap it up if you are going to replace it with the formula singing shows, and low brow comedies. It was nice while it lasted.
We need better programs that question our prejudices and challenge us to question revenge.

One of the best shows on TV. If NBC isn’t smart enough to keep it I hope someone else picks it up!

Finally a show that kept us entertained. One that kept us in suspense. NBC just disappointing that you don’t let a show have a chance. I hope they change their minds and that enough of us complain that our voices will be heard to change the outcome for this great show

I am soooooo disappointed with whoever was involved in the decision to cancel this show!!! I don’t even have the words to express how irate I was when I searched Google for information on Season 2s release date. I thought this show was phenomenal and was immediately trying to find the next season the second it was over. I don’t understand how they could just end it like this?!?! I REALLY hope they change their minds about this one cuz I haven’t been this invested in a new TV series since game of thrones or Sons of Anarchy ended. So… Read more »

Very disappointed NBC canceled The Endgame! I guess it’s back to watching Netflix instead of NBC. ‍♀️

It’s hard getting so vested in new shows! The networks are not empathetic to its viewers. This was a great show (Endgame)! I binge watched and was looking forward to Season deuce! Disappointed yet again! NBC SUCKS!!!!

continue The end game please
we love it

I really enjoyed The Endgame and I was looking forward to season 2. I think the network does not give enough time for a series, especially a middle of the season series to gain a folliwing. Not the first time I’ve disagreed with NBC. Guess that’sbwhy I watchba lot of CBS.

This is why I am hesitant to watch new series they cancel so quickly and this was a keep watching show just like the Blacklist. Shame on NBC

I don’t know what NBC is thinking cancelling this show. I looked forward to season 2. A worthy successor to The Blacklist.

I cannot believe the endgame has been canceled. That is one of the best shows that has been on TV in sometime. All the twists and turns were so fun to watch! Not sure what anybody’s thinking but that’s a huge mistake.

What were you thinking? Why would you cancel a show with that kind on ending. It wasn’t final between the women, and we wanted to see all the crooks go down. It’s more than dissapppinting, it was a stupid thing to do. Please bring it back.

So disappointing. I really liked that show. Most of the other shows NBC has aren’t that good.