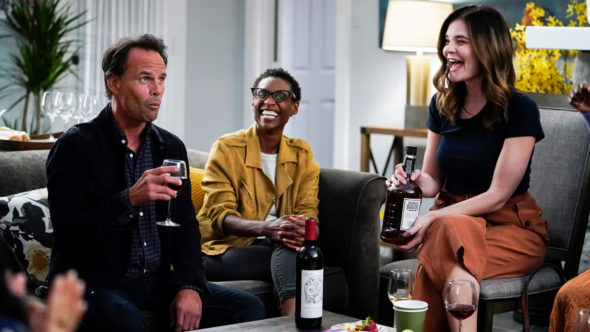 Fans of The Unicorn won’t be disappointed. CBS just announced they’ve renewed the TV show for a second season for the 2020-21 broadcast season.

The first season of The Unicorn, which wrapped in March, averaged a 0.71 rating in the 18-49 demographic and 5.66 million viewers. Though it underperformed when compared to CBS’ established Thursday night comedies, The Unicorn is among the top CBS TV shows for the 2019-20 broadcast season.

What do you think? Have you seen The Unicorn TV show? Will you watch season two on CBS?

Loved The Unicorn. A refreshing comedy with a very talented cast. Don’t change a thing. Can’t wait for Season 2!!

Looking forward to season two of The Unicorn

I look forward to season 2 of The Unicorn.

I LOVE The Unicorn and am so happy it’s been renewed. I’m from Raleigh/Durham so love the fact that it takes place there. The story line is fresh and the cast is perfect. I love all the characters and their relationship to each other. I laugh out loud at their interactions. It’s very relatable. A great addition to the Thursday night lineup.

The name was a big turnoff, so NEVER watched it. Thought it was something sci-fi or animated. Accidentally watched a few minutes of the last episode ending and LOVED it. Joined CBS All Access just so I could binge the entire season. Did so in two evenings, all 18 episodes. I wonder if you would have had higher ratings and viewership with a different name? Cannot wait for second season.

Loved The Unicorn. Want another season so bad.

So glad to see Unicorn has been renewed. Great show, love all the characters and story lines.

I LOVE THIS SHOW! I Hate that every time I start to like a show they cancel it after a season or 2. I HOPE they bring it back for season 2 even among the Covid-19 situation….i love Walter Coggins. He is so funny. (I first loved him in Vice Principals! He was hilarious!) AND…the the way they ended season1 with the promising new woman at the cemetery I thought was great!!! And I am from NC so I love that it is based in Raleigh!

I really like this show. The characters are all so good together. They tackle many current issues, and the humor is excellent. Happy to see it’s coming back

I really like this show. Slow going at 1st, a little hackneyed, but it grew on me. The characters became multi-dimensional, believable. I look forward to getting to know them better.

I love the Unicorn!! I wasn’t sure (with a name like that, as I had no idea what it was about. Sounded silly) BUT it’s so genuine, funny, relatable.
I like that he’s so involved with his girls. They are first in his life. I like the interaction between him & his friends.
All of the 3 families are so unique, so comical together.
REALLY glad to hear it’s getting a second season. Thanks CBS!

We enjoy this series but it is not one of our favorites.

This started off slow and didn’t seem like it would last but it did get better and I’m glad as I enjoy Walter in most things.

Pissed that Broke was Canceled
Reply to  PhilS

The show was garbage to me. I think whatever CBS exec liked Life in Pieces, liked this show. This was far worse and could not stand on its own without the big Sheldon lead-in. It should have been canceled on the ratings alone. Technically, Man with Plan was the strongest of the four (Broke, Carol, Man, Unicorn).

Kathy Brawley
Reply to  Pissed that Broke was Canceled

Carol, was so much better than Unicorn or Man with a plan.