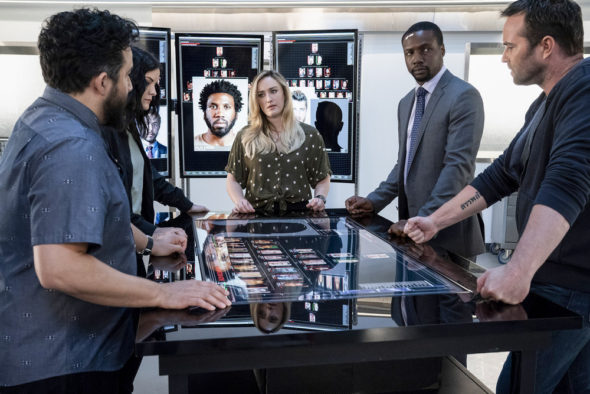 Is Jane Doe any closer to being whole during the fourth season of the Blindspot TV show on NBC? As we all know, the Nielsen ratings typically play a big role in determining whether a TV show like Blindspot is cancelled or renewed for season five. Unfortunately, most of us do not live in Nielsen households. Because many viewers feel frustration when their viewing habits and opinions aren’t considered, we’d like to offer you the chance to rate all the Blindspot season four episodes here. **Status update below.

An NBC action thriller, Blindspot stars Sullivan Stapleton, Jaimie Alexander, Rob Brown, Audrey Esparza, Ashley Johnson, and Ennis Esmer. After amnesiac “Jane Doe” (Alexander) is found in Times Square, FBI Agent Kurt Weller (Stapleton) and his team work to decipher her intricate tattoos. Despite a web of conspiracy and corruption, they begin to uncover the clues therein, as well as Jane’s identity. As the fourth season of the crime drama kicks off, the FBI team hunts a dangerous enemy operative, and a deadly new foe emerges.

What do you think? Which season four episodes of the Blindspot TV series do you rate as wonderful, terrible, or somewhere between? Should NBC have cancelled or renewed Blindspot for a fifth season? Don’t forget to vote, and share your thoughts, below.

**5/10/2019 Status Update: Blindspot has been renewed for a fifth and final season. Details here.

I love Blindspot! Kurt and Jane is the best couple ever!

Poor plot and disgusting acting. How this show survived its first season just exemplifies the stupidity of the audience. Low IQ and poor taste.

I love watching the show I’m glued to the TV when it comes on Best Show on Sky by a mile for me !

My favorite tv show! Can’t wait to watch it each week!!

This is a great show. But is it necessary to have same sex dudes in a romance? It is an action show dudes…I am hooked on it but I feel that kind of romance is not needed.

Loved Blindspot until this season! Don’t like the fact that she has turned. Hate this season!!!

Blindspot is my absolute favorite show! I love to watch it with my teenage children…we all look forward to it every week! It is so creative and always has awesome plot twists and plenty of suspense! Please keep it going!

Haven’t missed an episode since the beginning.

I love to watch Blindspot. It’s number 1. Sullivan Stapleton is my favorite actor.

You know what? I don’t believe in reviews. I belive that 99% of review poles are rigged and faked. Sure you will always have real people like me with various mixed opinions. But as far as what shows stay on the air and which ones don’t? I believe that it has more to do with butt kissing in the TV and movie industry than it does with viewers ratings. And now with my opinion? I have thought that blinspot was a great TV show since the first episode! And I still think it’s a great TV show! And like my… Read more »

This last episode of Blind Spot left me disappointed. There was blooper. Zapata had black gloves as she was cleaning up. She hears a noise in a bedroom walks in and no gloves are on as she approaches the little girl in the closet. I agree with Ms. Hamel. Who writes these plots? the beginning of this show was a joy to watch. Now I am not sure….

The season has left me very disappointed so far – especially when finding out that ‘Jane’ is supposedly back to her original self .. evil. Ready to take it off of my DVR schedule and just forget it all together. Too bad, as I turned a few people onto this show when it first started.

I love this series! Please do not cancel it! I truly look forward to it! It’s so disappointing when a great series comes on and canceled so quickly! When you ask for a rating from people, it’s like asking to leave feedback; no one wants to take the time but they really love it or have great things to say. Others do not take the time to read all of the information posted on a site. It is a really great TV series!

We love the show please, please do not cancel this great show!!! Please bring Jane’s brother back we love him on the show!! Could he be the twin that they did not know about???