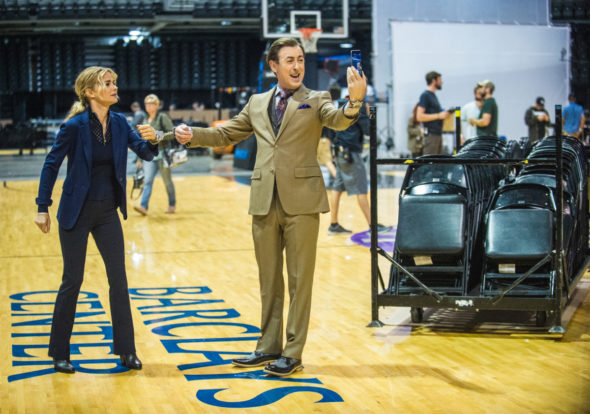 Despite predictions to the contrary, the Instinct TV show has been renewed for a second season on CBS. In season one, the ratings for the procedural TV series rose from the first week to the second, before dropping off pretty sharply, then rallying some. Based on the demo numbers alone, a cancellation seemed more likely, but like many CBS TV series, its average total audience size seems to have gotten Instinct past the finish line.

The first season of Instinct averaged a 0.81 rating in the 18-49 demographic and 7.859 million viewers. Find out how Instinct stacks up against the other CBS TV shows.

Deadline has confirmed the Instinct renewal.

What do you think? Did you expect CBS to cancel or renew its Instinct TV series for a second season? Did they make the right call? Let us know, below.

Instinct is mine and my husbands favorite crime show! I loved this season except it was so short. Please make it a full season for round 2! We can’t get enough of Lizzie and Dylan!!

Very happy to see that Instinct will be back. Instinct and Madam Secretary are my sunday night shows. Thanks for renewing both.

I love Instinct. I hope they will keep it. Of course since I like it they will cancel it. So far most of my favorite shows have been canceled. I guess I’ll have more time to read. It’s one of my favorite activities. They can’t cancel that!

Very happy that Instinct AND Elementary have been renewed.

Instinct was the show I expected to be cancelled but instead they cancel Deception which was a far more interesting show. I will never understand how this happens. The best shows are cancelled and the fairly mediocre shows are renewed. It must be politics.

Agree with you. Love Instinct, but Deception was one of the best shows on tv. Great storyline, cast, and one a family could watch together, discussing the plot twists and illusions. Deception was on at the wrong time and day and never given a chance. Would love to see CBS pick it up.

I am SO happy they renewed both Instinct and Elementary! Both are great shows with wonderful actors and interesting plots. Thank you CBS!

This has to be about the worst show on tv . Love Alan Cummings from The Good Wife, but this show is awful.

I am very happy they have renewed this show. I like the non-gory take that focuses on Cumming’s character’s deductive reasoning rather than shoot ’em ups, etc. I also like the chemistry between him and the Detective. It’s nice having two main characters interact without sexual tension or the “will they/won’t they?” subplot too prevalent in so many shows. I watch via the CBS app on an iPad, so appreciate having something fun like this.

Very, very happy that Instinct is renewed. Love this show: the cast, the humor, storylines all great! Thank you, CBS!

Soo happy Instinct has been renewed!! I look forward to this show every week. A fun, light crime drama that’s not dark and depressing. Great decision to renew.

So happy that this show has been renewed. I look forward to Sunday evenings just for this show.

I really like this show and am so happy they gave it another season. The time slot is not good for a new show – almost like they didn’t have faith in it. Sometimes it takes a couple or three seasons for shows to catch on. So sick of the shows that have been on for 10 plus years.