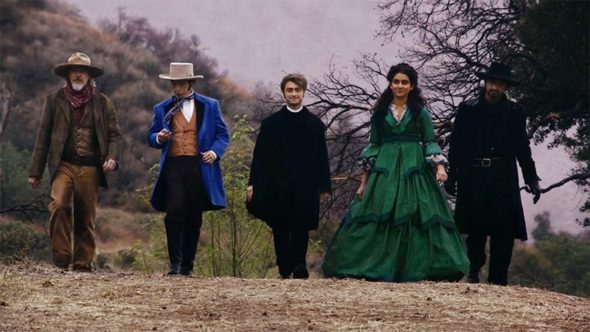 Miracle Workers will premiere its third season next month on TBS, and the cable channel has now released a trailer. The comedy series is headed to the Old West and the Oregon Trail for the upcoming season. Daniel Radcliffe, Steve Buscemi, Geraldine Viswanathan, Karan Soni, and Jon Bass star.

“The third season of the top-rated anthology comedy series Miracle Workers, this time transporting cast members Daniel Radcliffe, Steve Buscemi, Geraldine Viswanathan, Karan Soni and Jon Bass to the American Old West. Set in the year 1844, Miracle Workers: Oregon Trail follows an idealistic small-town preacher (Radcliffe) who teams up with a wanted outlaw (Buscemi) and an adventurous prairie wife (Viswanathan) to lead a wagon train west on the Oregon Trail across an American landscape which, much like today, is fraught with both promise and peril.”

Season three of Miracle Workers arrives on July 13th. Check out the trailer below.

What do you think? Are you excited about the return of Miracle Workers to TBS? Do you plan to watch season three?

I have enjoyed each season of miracle workers. I’m hoping that even though season 3 has just started that it will be renewed for a 4th season. The actors are great. I look forward to the new episode each week.

While I enjoy this show, I’m continued to be surprised that it keeps getting renewed

Have been waiting for the next Miracle Workers series, can’t wait to see it

1st season wasn’t bad, second was awful. so awful that I’m not looking forward to the next one