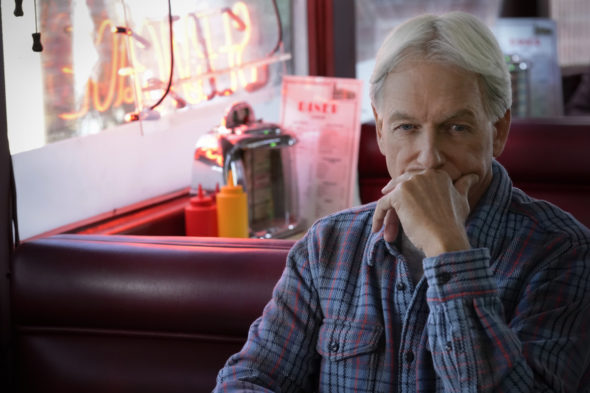 Leroy Jethro Gibbs is stepping away. In last night’s episode of NCIS, actor Mark Harmon departed the CBS series after 18 years as a series regular. Harmon first played Gibbs in 2003 in the predecessor series, JAG.

At the end of season 18, Gibbs was nearly killed in a boat explosion. The character had previously been suspended for assaulting a murderer and abuser of dogs. Harmon’s been seen in a limited capacity in season 19 and last night’s installment saw Gibbs and Special Agent Timothy McGee (Sean Murray) in Alaska, solving a case involving a contract killer hired by a mining company.

By the end, Gibbs had decided to stay in Alaska, telling his comrade that he feels “a sense of peace” and hasn’t felt that since the deaths of his wife and daughter. When McGee asks Gibbs what he’s looking for in The Last Frontier, Gibbs replies, “I don’t know. My gut’s telling me I’ll know when I find it.”

Harmon’s departure from NCIS is hardly a surprise. The 70-year-old actor signed a deal to continue with the series for season 19 but only in a limited capacity. Harmon remains an executive producer on the show and the door is open for him to return.

“As an executive producer and dear friend, Mark continues to be an integral part of the fabric of the show,” executive producer and showrunner Steven D. Binder said in a statement. “Our north star has always been staying true to our characters, and that truth has always guided the stories we tell and where those characters go. So regarding the future of Gibbs, as long-time fans of the show may have noticed over the years … never count Leroy Jethro Gibbs out.”

What do you think? Have you kept up with the NCIS TV series on CBS? Are you disappointed that Harmon has left as a series regular? Would you like to see him return at some point?

Soooo sad to see him leave. I hope the series will survive without him, and I sincerely hope he pops up in some cameos now and then. He has been an integral part of this series.

I stoped watching the show when Weatherly left.
I think season 20 will be the last as Harmon was the soul of the show.

Oct 11 NCIS and Mark Harmon’s final show as a series regular was well done. It allowed him to say “goodbye” and still leave the to door open for a visit. It could have been better if the writers found a way to make the suspension go away so his 18 years wouldn’t end with a black mark. I’m not impressed with Gary Cole as “Agent Parker”. I hope the lead role is not passed to him. Shaun Murray aka “Tim” deserves a chance. Opinion of an 18 yr +++ viewer

I’m sorry to see Mark Harmon leave but I know he was ready after all these years. Hopefully he can return as a guest from time to time. I will continue to watch to see what the future of the show brings. And hey, we still have reruns, which I also enjoy.

Times change and priorities change. Mr. Harmon can dial it back if he wishes to. He has been doing this a long while. That wears on you. But, I could see him popping up for an episode or two here and there – perhaps during sweeps. How about a nice little stand-alone mystery episode with he and Ducky getting together and tossed into a mystery to solve?

I have watched NCIS since it started. I don’t like the Day & Time change of the new series. I will miss Gibbs, but I won’t be watching every time.

Don’t care for the new lady. Wondering why bishops character left she was finally coming into her own.

Life is all about change and Gibbs has grown older, the other characters in the series are solid and if writers can keep the great scripts coming it should be good, I originally started watching because I like Mark Harmon, but I also like the story. I like the option that he is still around like ffornel

Would be nice to see him return from time to time as I will miss him and his character Gibbs. Show just will not be the same without him.