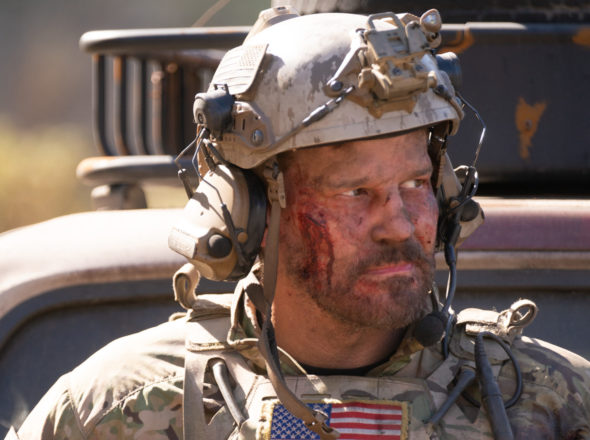 The Tier One team is on its way back. Paramount+ has announced a premiere date for season six of the SEAL Team series. There will be 10 episodes this time around, a typical order for a streaming series. This will be the show’s shortest season to date as the program previously aired on CBS, a broadcast network.

A military drama series, the SEAL Team TV show stars David Boreanaz, Max Thieriot, Neil Brown Jr., AJ Buckley, and Toni Trucks. The military action-adventure series centers on an exclusive Navy SEAL unit as they train for, plan, and risk their very lives to carry out perilous missions for the sake and honor of their country. Fierce and focused Jason Hayes (Boreanaz) leads the Tier One team. Despite the hardship it causes them and their families, this SEAL team is ready, willing, and able to embark upon secret missions at the drop of a hat. Team members include Jason’s trusted confidant, Ray Perry (Brown Jr.); loyal yet self-destructive Sonny Quinn (Buckley); and young Clay Spenser (Thieriot), a multilingual and second-generation SEAL. No-nonsense DEVGRU Intelligence Officer Lisa Davis (Trucks) is assigned primarily to Bravo Team.

The fifth season finished airing in January and season six will launch on Sunday, September 18th. Here’s the official announcement, as well as a teaser video:

SEAL TEAM is a military drama that follows the professional and personal lives of the most elite unit of Navy SEALs as they train, plan and execute the most dangerous, high stakes missions our country can ask of them. Jason Hayes (Boreanaz) is the respected, intense leader of the Tier One team whose home life has suffered as a result of his extensive warrior’s existence. His team includes his trusted confidant, Ray Perry (Brown, Jr.), the longest-tenured operator with whom Jason shares an ingrained shorthand; Sonny Quinn (Buckley), an exceptional, loyal soldier with a checkered past who still combats self-destructive tendencies; Clay Spenser (Thieriot), a young, multilingual second-generation SEAL with insatiable drive and dedication; Omar Hamza (Barsoumian), a senior chief with fifteen years of experience as a SEAL, the son of Syrian immigrants with deep understanding of the Middle East. Vital to the team’s success is Lieutenant Lisa Davis (Trucks), a no-nonsense, take-charge officer. Deployed on clandestine missions worldwide at a moment’s notice and knowing the toll it takes on them and their families, this tight-knit SEAL team displays unwavering patriotism and fearless dedication even in the face of overwhelming odds.

About Paramount+
Paramount+, a direct-to-consumer digital subscription video on-demand and live streaming service, combines live sports, breaking news and a mountain of entertainment. The premium streaming service features an expansive library of original series, hit shows and popular movies across every genre from world-renowned brands and production studios, including BET, CBS, Comedy Central, MTV, Nickelodeon, Paramount Pictures and the Smithsonian Channel. The service is also the streaming home to unmatched sports programming, including every CBS Sports event, from golf to football to basketball and more, plus exclusive streaming rights for major sports properties, including some of the world’s biggest and most popular soccer leagues. Paramount+ also enables subscribers to stream local CBS stations live across the U.S. in addition to the ability to stream CBS News Network for 24/7 news and CBS Sports HQ for sports news and analysis. For more information about Paramount+, please visit www.paramountplus.com and follow @ParamountPlus on social platforms.

About CBS Studios
CBS Studios is one of the world’s leading suppliers of entertainment programming, with more than 60 series currently in production for broadcast and cable networks, streaming services and other emerging platforms. The Studio’s expansive portfolio spans a diverse slate of commercially successful and critically acclaimed scripted programming, which includes genre-defining franchises such as “NCIS,” “CSI” and the ever-growing “Star Trek” universe, award-winning late night and daytime talk shows, as well as an extensive library of iconic intellectual property. The Studio also develops and produces local language and international content originating outside of the U.S. with series in the U.K., Europe, the Middle East and Australia.

What do you think? Are you a fan of the SEAL Team TV series? Will you be watching season six on Paramount+ next month?

I absolutely love this show. Depicts Seals and what they go through to protect our nation. True patriots, selfless warriors. I have been a fan since day 1 the series started.

Can’t wait for it to come back on love it, it’s been off to long.I will watch it.Hope it will be another season too.