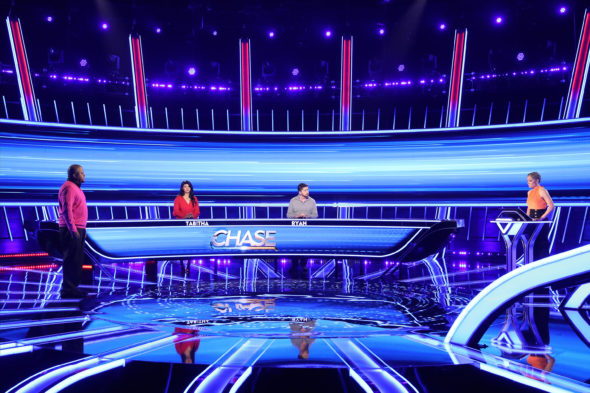 Could you outwit the Chaser? Has The Chase TV show been cancelled or renewed for a third season on ABC? The television vulture is watching all the latest cancellation and renewal news, so this page is the place to track the status of The Chase, season three. Bookmark it, or subscribe for the latest updates. Remember, the television vulture is watching your shows. Are you?

Airing on the ABC television network, The Chase TV series is hosted by Sara Haines. The game show is a fast-paced competition where three competitors must use their wits and knowledge to face off against the Chaser, a ruthless quiz genius who is determined to stop the contestants from winning cash prizes. In each episode, contestants are challenged to think faster than they ever thought possible, to answer up to 166 questions across all topics. Jeopardy! trivia masters James Holzhauer, Ken Jennings, and Brad Rutter are joined by Mark Labbett (from the original UK version of the show) and they each take turns serving as the Chaser.

The first half of the second season of The Chase (which aired during the 2020-21 season) averaged a 0.48 rating in the 18-49 demographic and 3.62 million viewers in the live+same day ratings (includes all DVR playback through 3:00 AM). Compared to season one, that’s down by 30% in the demo and down by 23% in viewership.

The second half of the second season of The Chase (which aired during the 2021-22 season) averaged a 0.31 rating in the 18-49 demographic and 2.37 million viewers in the live+same day ratings (includes all DVR playback through 3:00 AM). Compared to season one, that’s down by 55% in the demo and down by 49% in viewership.

While these numbers don’t include further delayed or streaming viewing, they are a very good indicator of how a show is performing, especially when compared to others on the same channel. Though there can be other economic factors involved, the higher-rated shows usually get renewed and the lower-rated ones get cancelled. Find out how The Chase stacks up against other ABC TV shows.

Will ABC cancel or renew The Chase for season three? This show did well in its first season which aired earlier this year. The series fits in well with the network’s a growing staple of summer game shows so, I think it will be renewed. I’ll update this page with breaking developments. Subscribe for free alerts on The Chase cancellation or renewal news.

What do you think? Are you glad that The Chase TV show has been renewed for a third season? How would you feel if ABC cancelled this TV series, instead?

THRILLED to see The Chase returning… LOVE to watch all of the Chasers! We all love them all – Big Mark Labett fans!!!!

Please do continue this program. My wife & I love it! It gives a few smart people an opportunity to complete against one of greatest minds for money.

Am thrilled that the Chaser has been renewed!

Please bring back The chase.
The best show.

I definitely want The Chase to be renewed. It is the best nighttime game shows, and the amounts of money are great too.

Sad loved the show hope it doesn’t get canceled

Love the The Show the Chase please don’t cancel it

We love it! Sunday night go to!! Bring it back !

We love it please renew it. One of the last show worthy to be watched!

I absolutely love this show. My very favorite!! Please keep it on. Entertaining and informative.

Renew it. I miss it!

Great show! Sure hope Season 3 is in the works!

My husband and I would be very disappointed if The Chase was canceled…. we love the show.

Love the show. Keep it going.