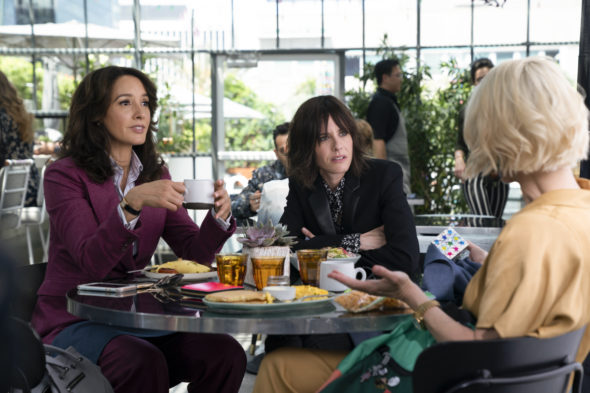 *1/13/20 update: Showtime has renewed The L Word: Generation Q for a second season.

Love it. We so need this show especially at this time. The ratings would be higher if they would show it internationally. More people are watching then the # indicate but they are illegally streaming it.

Renew!! I’m loving the story lines and the answers to old questions. Finley’s armpits though got to go.

I got showtime just to watch The new L Word Generation Q. I love this show.

I loved the original! I am very happy for the reboot, for the entertainment as well and incorporating up to date struggles and issues!

This is one of those shows who’s fans are fanatical about the show bc its soo meaningful! Every thing I loved about The L Word is everything I am loving about Generation Q! I am sad when I have to wait for another episode! This is one of the best shows of all time! The acting and meaning behind this show is powerful! Thank you to the cast for another Incredible show!

I love it! It should definitely be ran for more seasons!

Love having the show back. It’s like seeing old friends. The efforts made to make the show more inclusive are great! New storylines are cooking now. Praying for Season 2!!

I love the reboot. Loved the original. The reboot deals with the struggle that have always been dealt with by our community and new issues that are being presented to us.

Loved it except would have like to have seen tina and bet still togather.

I hate that it is so political! Not fun to watch like it used to be. Too serious and very political. I would watch Cspan if I wanted to watch politics. Does everything HAVE to have a cause? How about entertainment being just that: entertaning.