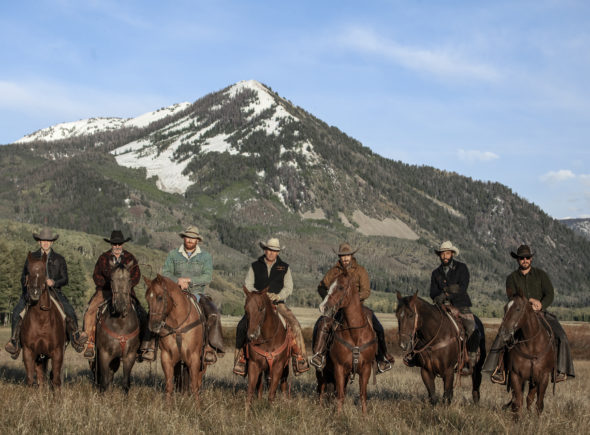 What’s in store for the Duttons? Has the Yellowstone TV show been cancelled or renewed for a second season on Paramount Network? The television vulture is watching all the latest cancellation and renewal news, so this page is the place to track the status of Yellowstone season two. Bookmark it, or subscribe for the latest updates. Remember, the television vulture is watching your shows. Are you?

The first season of Yellowstone averaged a 0.38 rating in the 18-49 demographic with 2.24 million viewers. Learn how Yellowstone stacks up against other Paramount Network TV shows.

7/24/18 update: Yellowstone has been renewed for a second season by Paramount Network. Details here.

What do you think? Are you glad that the Yellowstone TV show has been renewed for a second season? How would you feel if Paramount Network had cancelled this TV series, instead?

I love this series!!!

love love love this show. It is a soap opera but so cool in today’s day. I hope it continues as I look forward to watching it, though NOT paying for it, on PRIME once a week – $3.00. whem I already pay for cable + 140 channels.

My husband and I love this show! Please hurry with second season. First season too short!

I absolutely love this show. Rip is fantastic!! Can’t wait for next season.

I’m THRILLED this fantastic show is coming back for a second season. Best show on TV!

Can’t wait to see season 2!!!! The show is fantastic my hubby and I love it !!!!! Great story lines I wish there were more episodes !! Bring it back in the fall as well!!!

I think Yellowstone tv show is by far the best thing television has ever seen, I would hate to see it canceled, I absolutely love this show

Hoping this series will be around for many more seasons! I love the great storytelling and many avenues this show could take. I look forward to new episodes every week!!!

I enjoy this show and its location. The credits are wonderful. Suggestions in hope of renewal … reduce some of the violence and the frequency of jumping between scenes of the story. I sincerely hope it gets renewed.

Bring from Bozeman (now living in Chicago) I find this show very entertaining! Please renew for another season!!

Please make this a for many seasons to come. So many avenues it could go.

TV is seriously lacking any decent family shows. So many great characters that can be woven throughout the series

I ABSOLUTELY LOVE YELLOWSTONE!!!! John Dutton is the new JR Ewing!!! My husband and I look forward to watching this show every week. PLEASE, cast a second season for Yellowstone.

Please keep Yellowstone on, the little bit it has been on it looks really good. With everything going on now it’s fun to see cowboys and Indians in a modern day look at it. To see a land owner keeping his land and cattle while developers and native Americans try stealing his land and water way. It’s a fun show to watch and Kevin Costner is perfect in this role. Thanks for your time

Is Yellowstone going to come back on ?

This week because 4 July just had off holiday. But on tonight at 10stay tune catch commerical.

Please renewed so good many more to come it high ratings pick up soon.