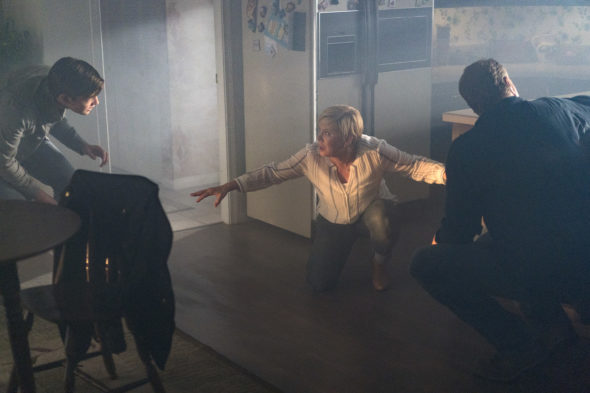 Why so quick to cancel just from points? All that should tell you is to make a change somewhere it takes time. This was an awesome show I fell in love. I think you should if you can bring it back with a different approach and I am sure if you just take the time to think you will find that. I pray this show comes back.

No way this has bern cancelled, just sat and watched both S1 & S2 on Netflix over the past week…..this is a great program that is totally deserved more than 2 seasons……very unhappy viewer…… 🙁

Netflix needs to take over and bring beyond back it was a fantastic program and i have loved every second iv watch the full 2 seasons on netflix over a week and its one of my favourite seasons out there please dont cancel the show give it a chance people will love it just like i did.

beyond is amazing we need season 3 please dont cancel

I really liked the show so now you are left in limbo .if you mew it wasnt gpong to be renewed it could of ended different not cool

Wow…just wow, this is probably the best series I’ve watched ever AND THEY LEAVE IT ON A ******* CLIFHANGER…WHAT THE ****! What happened to Arthur ffs. WE NEED THIS SHOW BACK, I DONT CARE IF VEIWERS WENT DOWN, WHAT ABOUT THE VIEWERS WATCHING IT NOW. THIS IS ******* BULL ****

Personally I think beyond should have season three because quite frankly you can’t leave a cliffhanger that big at the end and not continue the story, ridiculous cancellation, I absolutely loved this show but now I can’t watch no more! Thanks a lot freeform

This is why I am hesitant to get into shows on Freeform. Two seasons and they are gone! Give them a chance or give us closure instead of a finale episode that gives glimpses of what may come in the next season that never occurs!

Have been watching the show on Hula and really enjoying it. I was very excited about what is to come for season 3..im very upset this show has been cancelled. It was now getting really good. It’s sad we live in a society if there isn’t instant gratification meaning high enough Nielsen ratings then they cancel a show. Do they look at how many people are watching it on Hula or some other streaming platform on the internet? Do they rate or look at those #s? So many people have gotten rid of their cable due to inflated pricing and… Read more »

Agreed. My husband and I watch on hulu. We don’t have cable t.v.

I loved beyond and really got into it. After the ending of season two I was sure there would be a third. Dissapointed

Just watched the season 2 finale on Hulu… pretty upset the show has been cancelled. I Loved the storyline, and I am itching to hear more about the Realm.

Seeing how I watched the entire show on Hulu, I wonder how many views it has there vs. actual TV ratings…?

Also on Netflix and other streaming outlets

Please don’t cancelled Beyond Season 3, Its hard when we start loving a show and then get cancelled. I love Beyond t.v show. Please renewed season 3!
We need season 3!

Man I am so mad that they aren’t doing a season 3 me and my mother watching it and we loved it. Both of us want a season 3 so bad. And yeah I agree with others people. Make it like and Netflix show or a Hulu show. Just please for the love of god bring back beyond. The story is so creative and interesting. And they left us on a giant cliffhanger. Like where did wila go? What’s gonna happen to Charlie and Holden? What about Holden and wila? Will wila get with Luke? Like so many unanswered questions… Read more »