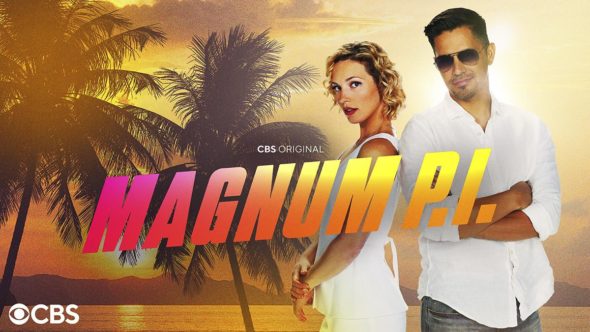 The original Magnum, PITV series was a big hit for CBS back in the 1980s. This reboot has done pretty well in the ratings for the network but it would be difficult to consider it a hit. Will it survive to see another year? Will Magnum PI be cancelled or renewed for season four? Stay tuned. *Status Update Below.

Magnum PI stars Jay Hernandez, Perdita Weeks, Zachary Knighton, Stephen Hill, Tim Kang, and Amy Hill. This reboot of the 1980s TV show follows Thomas Magnum (Hernandez), a decorated former Navy SEAL who repurposes his military skills to become a private investigator. He lives in a guest cottage on Robin’s Nest, the luxurious estate where he works as a security consultant to supplement his P.I. business. The “majordomo” of the property is Juliet Higgins (Weeks), a beautiful and commanding disavowed MI:6 agent who keeps Magnum in line. When Magnum needs back-up on a job, he turns to his trusted buddies and fellow POW survivors, chopper pilot Theodore “TC” Calvin (Hill) and Orville “Rick” Wright (Knighton), a former Marine door-gunner who now runs a nightclub. Magnum frequently has run-ins with police detective Gordon Katsumoto (Kang) and the two are more alike than either cares to admit. The unofficial “House Mom” and cultural curator of Robin’s Nest, Teuila “Kumu” Tuileta (Hill) is also one of Magnum’s biggest fans.

5/8 update: You can see the latest night’s ratings in context.

For comparisons: Season two of Magnum PI on CBS averaged a 0.65 rating in the 18-49 demographic and 6.67 million viewers.

What do you think? Do you like the Magnum PI TV series on CBS? Should it be cancelled or renewed for a fourth season?

Love this show….the cast has incredible connecting with each other and I love the writers do a super job with interesting storylines. Definitely need a fourth season.❤️❤️❤️❤️

I love the reboot so much and will be heartbroken if it’s not renewed! Lord, please let it be renewed for a fourth season!

Keep waiting for the writing to get better. There is virtually no other character development past magnum and Higgins. That was the huge draw to the old series, the individual characters and how they all blended to create that great chemistry. Nothing like that so far.

The romance needs to sizzle between Magnum and Higgins. Bring in love for all the buddies! Show is fabulous!

Well the new Magnum show never was any good and it gets beat in the 18-49 demographic by Shark Tank of all things. What an embarrassment. I don’t think any of the main characters makes an emotional connection with the viewers.

You are obviously not watching same Magnum that I am! They are fantastic.

I like the show … but someone needs to give Perdita’s hair a major re-do. Never looks good.

I love Perdita’s hair! She is all class!

I have been a fan of New Magnum PI because it is different from original. The reboot is fresh. The actors are definitely the best I have seen in all the rebooted shows this far. These actors really put themselves into,the characters displaying the emotional,content that too many shows lack.That human factor in some is so over the top,people don’t do crazy things like that when it comes to science. As a movie buff, take the most successful shows over 3 decades and that human bonding factor along with a little romance will always intrigue an audience. Magnum PI became… Read more »

Bring back Magnum P. I.

Love this show… What more can I say.

I love this show!! The chemistry between the actors is as good as it was in the original series!
I love the banter between the characters & as far as I’m concerned Jay Hernandez is the most handsome,sexiest Man alive!!

I agree 100% on all of that! Jay Hernandez IS the sexiest man alive!

I love this show. Have watched it since day one. I hope it’s not cancelled.

I really enjoy this show and look forward to Friday nights. I truly hope it’s around for a lot longer .

I love this show and I hope it continues for many more seasons!