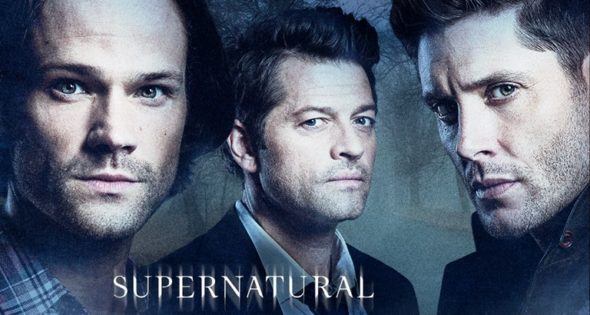 Another depressing moment of 2020! We love Supernatural and that we could always depend on it to cheer us up. We really hate to see it come to end. We can’t believe it’s happening! Going to be grieving for this show! ;.( Thanks for the years you gave us! Please don’t go!???

My all-time favorite show… so sad to see it end. There will never be another Supernatural.

I agree with Renee all of us fans hope the show will not end. But we have a suggestion ……
maybe the producers will make a final MOVIE that would include everyone, even the characters we don’t really like, like Crowley and Niome

I LOVE (to hate) Crowley!!!! I’ve been missing his sassy ass! A movie is a great idea!

We LOVE Crowley! We’re going to miss them all! ;,(

One of the greatest shows ever created. Really set the bar high. The cast, all the way to the writers … total greatness! Supernatural will be missed by many. Thank you for 15 great seasons.

I can’t believe this ! My heart is broken… Supernatural was one of the greatest shows I ever watched…a show that I couldn’t wait to see the next season…a show that was emotional,thrilling, Spontaneous Etc..To hear there won’t be a season 16 is really a heartbreaker. I hope something changes their minds and continue pls ….

I can’t believe you will be leaving us on a cliff hanger no ending to a wonderful 15 season long show I am so excited to just sit and ponder as to what could have happened instead of knowing if they destroyed that self loving piece of garbage God thank you for ruining what could have been a great show and a wonderful ending all because of a few lousy viewers when all you needed was one more season anyways. I guess you fat cats made enough money anyways so your probably happy with yourselfs.

I have been watching Supernatural from day 1 and I am also a die hard fan. I have watched every season atleast 15 times and I will continue to rewatch.. The number one best TV series ever. Although, I am completely heartbroken to hear there will not be more seasons coming in the future, I can understand the actors are ready to make a change in their life. I want to thank all the people who dedicated so many years of their lives to giving the world the best TV series in history, in my opinion. I will truly miss… Read more »

I first joined “one of those streaming” services to watch another show and took a chance on Supernatural during the current run of Season 14. I have since “binge-watched” the entire show from the beginning to the last current show some 9 times. There’s a reason that this show is one of the longest-running shows on the CW, it’s just that good. Not only are the shows entertaining with the “beasties and ghoulies”, but the relationship between Sam and Dean, plus the rest of the cast, is such a statement on Friendship and Loyalty. Honestly, I think all these performers… Read more »

I didn’t really watch Supernatural until 2012. I suffered a traumatic injury that made me wheelchair-bound. My four sons told me it was my style and I would enjoy it. I have grown to love the story which is a really dramatic realization of family, the search for love and honor and how to become simply good men. Even with plot flaws, some stretches in plausibility, the acting ability has grown, the story has become more adult and the resolutions more succinct. The whole package is worthy of the people involved. This isn’t just a binge-worthy series. It’s a landmark… Read more »

I have been watching since day 1! Do not cancel..Supernatural is the best show ever!!

I have been watching Sam and Dean fight different monsters and battles for a very long time. I started this show when I was younger with my mom. I absolutely love supernatural and very upset that the one show i have actually watched and stayed with from beginning to end is going to end. There could be so much more for years to come, and it would really be disappointing if the show ends with S15/E13. That is no real ending for Sam and Dean and the rest of them after everything they have accomplished. Would love to see a… Read more »

Supernatural was a flick one could watch to emerse oneself into something other than reality.. It was actually pretty decent. Why not carry on for several more seasons. Who’s it really hurting by continuing? I don’t understand why shows with good ratings are always being removed & replaced by shows with no moral compass..

i am going to miss this show.. die hard here.. from the very beginning. the only thing i hated is the theme song was changed. loved it.. the show is was amazing.. couldn’t wait for each episode to see what was coming next… I seen the boys grow up and evolve. kudos for a great show guys. Thanks for keeping me in suspense, curious, and amazed with each episode…