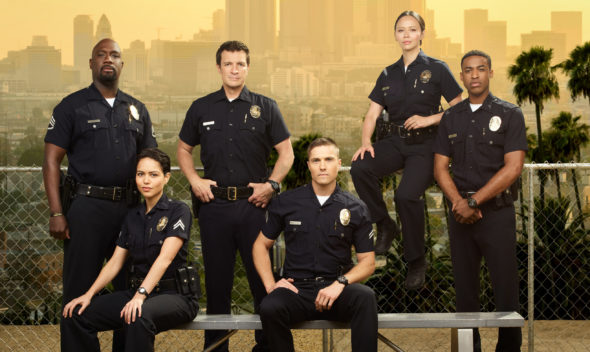 Is John prepared for whats to come? Has The Rookie TV show been cancelled or renewed for a third season on ABC? The television vulture is watching all the latest cancellation and renewal news, so this page is the place to track the status of The Rookie, season three. Bookmark it, or subscribe for the latest updates. Remember, the television vulture is watching your shows. Are you?

Airing on the ABC television network, The Rookie TV show stars Nathan Fillion, Alyssa Diaz, Richard T. Jones, Titus Makin Jr., Melissa O’Neil, and Eric Winter. The series follows the experiences of John Nolan (Fillion), a middle-aged divorced man from Pennsylvania. He owns a construction company but decides to give up his old life to pursue a new career as a police officer in the Los Angeles Police Department. He graduates from the Police Academy and becomes the oldest rookie on the force. He works with Sergeant Wade Grey (Jones), training officers Angela Lopez (Diaz) and Tim Bradford (Winter), and fellow rookies Jackson West (Makin Jr.) and Lucy Chen (O’Neil). As season two begins, John is six months into his career as a cop and is put to the test by new challenges, romantic relationships, and potentially deadly situations.

The second season of The Rookie averaged a 0.64 rating in the 18-49 demographic and 4.32 million viewers. Compared to season one, that’s down by 12% in the demo and up by 4% in viewers. Find out how The Rookie stacks up against other ABC TV shows.

Will ABC cancel or renew The Rookie for season three? Though the ratings aren’t very good, I suspect they are good enough for an ABC renewal. I’ll update this page with breaking developments. Subscribe for free alerts on The Rookie cancellation or renewal news.

5/21/20 update: The Rookie has been renewed for a third season on ABC.

What do you think? Are you glad that The Rookie TV show has been renewed for a third season? How would you feel if ABC had cancelled this TV series, instead?

Please renew! My husband and I love the show. The silliness, the seriousness and the love stories. Love it all!

I’ve always been a fan of Nathan Fillion since Firefly! This is a fun show to watch until they do what all network shows seem to enamored with now! Forcing everyone to be subjected to their LGBT brainwashing! Leave that crap out and renew the show!!

Take out some of silliness, more serious stories which seemed to be the new norm

Want it to be renewed

I think it should have a third season. Good storylines and great acting. Fun show to watch.

If ABC does not renew The Rookie for a 3rd season I think I will be done with ABC evening shows. If you intend to end a show, don’t leave it with a cliff hanger for the last show. At least let it run out with a conclusion. All the more reason to only watch a series on Showtime, HBO, or other Pay TV networks.

The Rookie has Ultimately been one of my favorite Night Time shows! I look forward to seeing it every week and was so disappointed in the ending of season two that I can hardly stand it!
I truly hope that The Rookie comes back for season Three.

Please renew the Rookie for a third season , it is a great show !

Renew the Rookie, we enjoy it.

Spero che rinnovate a me piace molto Nolan and company!!!

Please renew The Rookie Nathan does such a good job and friends.