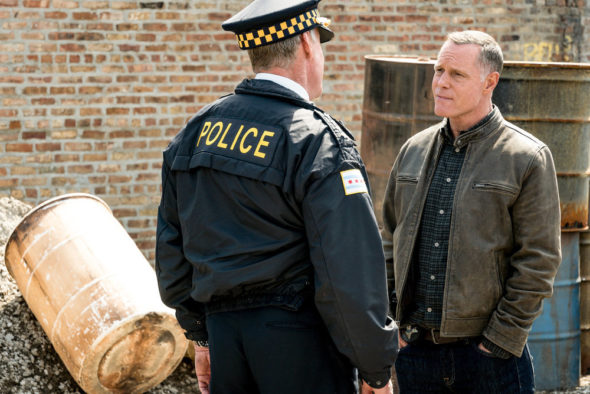 Will justice prevail on the seventh season of the Chicago PD TV show on NBC? As we all know, the Nielsen ratings typically play a big role in determining whether a TV show like Chicago PD is cancelled or renewed for season eight. Unfortunately, most of us do not live in Nielsen households. Because many viewers feel frustration when their viewing habits and opinions aren’t considered, we invite you to rate all of the season seven episodes of Chicago PD for us here. *Status update below.

What do you think? Which season seven episodes of the Chicago PD TV series do you rate as wonderful, terrible, or somewhere between? Should NBC cancel or renew Chicago PD for an eighth season? Don’t forget to vote, and share your thoughts, below.

Chicago PD is by far the best show on television!

I am eagerly waiting series 8 to come to the uk.Any update on this please?

Just heard they got rid of the Rojas character.
Always losing people on this show.

I think all the Chicago series have been exceptional!

Love the show! A retired Det from jersey city loves the show /after years of him talking about it I watched it one night -I’m a 70 year old grandma that loves it!!!! The only other show I ever watched reruns was Seinfeld- LOVE VOIT- MISS AL
Keep up the good work!!!!

Yes, it was wrong to lose Al, and officer Sean Roman

I just read ‘Chicago P.D.’ Gets Slammed by Critics — and Hank Voight is the Main Target
BS, this is a great show.
Voight doesn’t discriminate. He hates criminals, not a racist at all.

Love Chicago PD Hated to see Al go but what can you do. I know bring him back from the from the dead. Thr show always leaves you second guessing what’s going to happen next.

I’m a little late to the game; started watching the show about 2 months ago & I’m hooked!! Look forward to another 3 seasons of this show!! On a personal note…I do miss Sophia Bush as Det. Lindsey though. Too bad she left the show. : (

You should be able to find the series from the beginning online.
Better than most on TV now.
They’ve lost a few good characters, good ones too

Chicago PD is one of the few TV shows I look forward to viewing each week. I can’t wait for the new Season to begin!!! Whatever you do, PLEASE DO NOT CANCEL THIS SHOW.

I do not understand WHAT ION TELEVISION could possibly be thinking OR NOT THINKING!!!!!! OBVIOUSLY! To go and “mess up” nicely said, the schedule they had before! Apparently they have “newbees” running the show and it is extremely obvious “they” have NO CLUE as to what “they” are doing and DO NOT CARE AT ALL ABOUT THE VIEWERS OF ION! Positively entertaning?………. I THINK NOT! You definitively NEED TO RETHINK YOUR SCHEDULING. …..ie;CRIMINAL MINDS, BLUE BLOODS,CHICAGO PD! You have really dropped the ball on this one!!!!!! BIG TIME!

I love Chicago PD. So excited to see it has renewed for more seasons! I will definitely be watching.

Please DON’T CANCEL THIS SHOW! IT really holds your attention; with every episode!!!