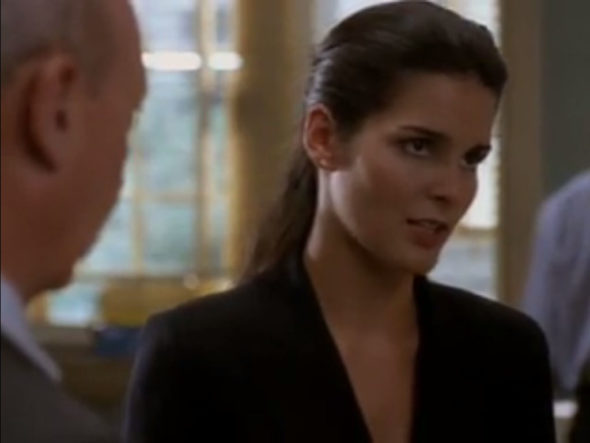 Law & Order was revived for its 21st season earlier this year, and viewers saw the returns of Anthony Anderson and Sam Waterston, two stars from the original 1990-2010 run on NBC. Anderson has already departed the series after one season, and the future of Waterston’s involvement is currently unknown. However, viewers could see another former star return – Angie Harmon.

For three seasons between 1998 and 2001, Harmon starred in the series as ADA Abbie Carmichael and also appeared on six episodes of Law & Order: SVU. Now, the actress says that she is open to reprising her role. “I would love it,” she said. Harmon revealed that series creator Dick Wolf reached out to her while filming season 21. She said the following about a possible return to the NBC drama to ET Online:

The outlet also revealed that Harmon recently spoke to S. Epatha Merkerson, who played Lieutenant Anita Van Buren for 16 seasons. “Just know that was a really, really wonderful time in my life. I mean, what a great time to, you know, begin an acting career,” she says, before joking that Carmichael could be the next DA. “That would be perfect. Just hang on, everybody.”

Waterson, Hugh Dancy, Jeffrey Donovan, Camryn Manheim, and Odelya Halevi star in the revival of the NBC procedural drama which airs on Thursday nights. Law & Order will return to NBC Thursday nights this fall for its 22nd season.

What do you think? Would you like to see Harmon return to Law & Order?

Best news I’ve heard all day. But try to make it permanent. I really miss Angie.

Yes yes yes! I love her!

Would love to see Harmon return!

That would be terrific!!!

Please come back, Angie. Abbie Carmichael was the best ADA in Law and Order history!

Angie Harmon–yes, please bring her back. She is one if my all time favorite actresses.

Yes please bring her back. She is an amazing actress and she brings so much life to a show.

Even for just a story arc I would absolutely love this!

She should come back as a regular. That current cast is BORING!

She would be soooooooo much better than the current guy. He annoys the pi$$ out of me.

Yes. Please bro g her back!