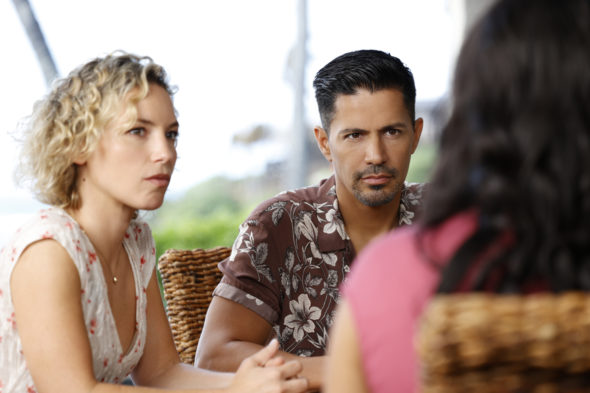 Thomas Magnum is off the case. CBS has cancelled the Magnum PI TV series so it won’t be returning for a fifth year and the 2022-23 TV season.

An action-drama series, Magnum PI stars Jay Hernandez, Perdita Weeks, Zachary Knighton, Stephen Hill, Tim Kang, and Amy Hill. Recurring performers include Lance Kim, Chantal Thuy, and Martin Martinez. This reboot of the 1980s TV show follows Thomas Magnum (Hernandez), a decorated former Navy SEAL who repurposes his military skills to become a private investigator. He lives in a guest cottage on Robin’s Nest, the luxurious estate where he works as a security consultant to supplement his P.I. business. The “majordomo” of the property is Juliet Higgins (Weeks), a beautiful and commanding disavowed MI:6 agent who keeps Magnum in line. When Magnum needs back-up on a job, he turns to his trusted buddies and fellow POW survivors, chopper pilot Theodore “TC” Calvin (Hill) and Orville “Rick” Wright (Knighton), a former Marine door-gunner who now runs a nightclub. Magnum frequently has run-ins with police detective Gordon Katsumoto (Kang) and the two are more alike than either cares to admit. The unofficial “House Mom” and cultural curator of Robin’s Nest, Teuila “Kumu” Tuileta (Hill) is also one of Magnum’s biggest fans.

Airing on Friday nights, the fourth season of Magnum PI averaged a 0.42 rating in the 18-49 demographic and 5.24 million viewers. Compared to season three, that’s down by 20% in the demo and down by 6% in viewership in the live+same day ratings (including DVR playback through 3:00 AM). In the live+7 day ratings, the reboot averaged a 0.70 demo and 7.38 million with delayed viewing added in. It is likely the most-watched broadcast series to be cancelled this season.

Deadline reports that the cancellation comes after CBS and the show’s studio, Universal Television, couldn’t come to an agreement for a fifth year. As traditional viewing has been dropping, networks are less willing to spend as much on shows that they don’t own. There’s no word yet on the potential of Universal TV shopping the series elsewhere.

In the past 24 hours, CBS has also cancelled B Positive, How We Roll, Good Sam, and United States of Al.

What do you think? Have you been keeping up with the Magnum PI TV series on CBS? Are you sorry to hear that it’s been cancelled and won’t have a fifth season?

Blank CBS. This is a good show and deserved better. I knew they would do the wrong thing again.

This is a shame…it is an excellent show and one of the highlights of my week! Please pick up the show, somebody else!

Well maybe CBS needs to look all demographics and NOT just 18-49. This is rediculous.

This is a bad move! Magnum P I had a great following. I think you need to reconsider!

WHAT?! Completely surprised by this.

I am so devastated. First ION TV takes away my beloved NCIS:LA and now this. I am so heartsick. I don’t know what I’m going to do now. I’m beyond angry.:(

Yeah, I saw that they dropped NCIS:LA for MacGyver. I hate that. At least NCIS: LA is still on the air though.

No, renewed for another season

Correction : they still show it but early on Mondays

To average 5.24 million viewers on a Friday night in this day and age is honestly impressive. Haven’t really checked this show out but it seemed like the ratings were still pretty stable. Like the poster Burnout mentioned, they could put it on Peacock.

No, that is NBC. CBS is Paramount+. Time to lobby Netflix, too.

The show is from Universal Television. Peacock is owned by NBC Universal. It just aired on CBS.

Cannot believe they cancelled this show. One of the good ones! You idiots!!!! Keep your stupid sitcoms on… Done with CBS

UniversalTV could put it on Peacock since they and the show are owned by NBCUniversal.

This is pretty Bad.
I hope it can be saved by another network.

Very disappointed! Loved the whole cast. Hopefully another network will pick it up

Very disappointed! A lot of great shows are being cancelled by CBS. Sad indeed!

I agree with you. It is not right what they are doing.

I believe this us a good show and should not have been cancelled.

I agree with you this is good show. They should not cancel it.