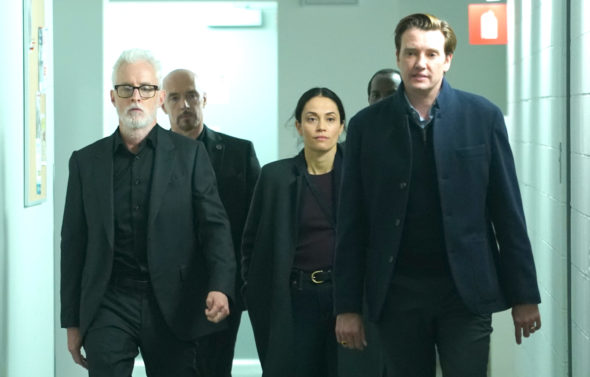 Can a creator outsmart his creation in the first season of the neXt TV show on FOX? As we all know, the Nielsen ratings typically play a big role in determining whether a TV show like neXt is cancelled or renewed for season two. Unfortunately, most of us do not live in Nielsen households. Because many viewers feel frustration when their viewing habits and opinions aren’t considered, we invite you to rate all of the first season episodes of neXt here. *Status Update Below.

A FOX action-thriller series, the neXt TV show stars John Slattery, Elizabeth Cappuccino, Jason Butler Harner, Fernanda Andrade, Eve Harlow, Aaron Moten, Michael Mosley, Evan Whitten, and Gerardo Celasco. The story revolves around Silicon Valley pioneer Paul LeBlanc (Slattery) who built a fortune and his legacy on his world-changing innovations. After discovering that one of his own creations — a powerful artificial intelligence called “neXt” — might spell doom for humankind, Paul tried to shutter the project, only to be kicked out of the company by his own brother (Harner). When a series of unsettling tech mishaps points to a potential worldwide crisis, LeBlanc joins forces with Special Agent Shea Salazar (Andrade) and her unique and talented team. Now, they are the only ones standing in the way of a potential global catastrophe, fighting an emergent superintelligence that will deploy the immense knowledge it has gleaned from the data all around us to recruit allies, turn people against each other, and eliminate obstacles to its own survival and growth.

What do you think? Which season one episodes of the neXt TV series do you rate as wonderful, terrible, or somewhere between? Do you think that neXt should be cancelled or renewed for a second season on FOX? Don’t forget to vote, and share your thoughts, below.

It seems every network will renew every show that is mindless drivel for people with an IQ under 70, but when a intelligent show, like NEXT, comes along that makes you pay attention and think, it is doomed from the start. I guess network execs hate to think or concentrate too.

I really liked it closest thing to person of interest that we had to fight to get a season 6! It kept my interest and I was surprised that it got cancelled it’s ratings are as good as the dreadful Chicago fire, medical and I think police! Pretty sure it’s another Dick Wolf franchise and I can’t watch!

Please renew Next. It was a fun sci-fi thriller.

We loved this series. My heart rate went up every episode but it was great, funny & thrilling! Everything about it was unique, new & possible. It should Not have been cancelled.

Come on Netflix, please pick up neXt!

Wonderful series with a remarkable look at the human relationships affected in the face of this threat! Four more seasons, at least!!

This was a great series, why would FOX cancel, very short sighted,

The way you aired this show you didn’t give it a chance to succeed. It wasn’t on consistently, it aired a month or more apart between episodes on different nights and then finally you put it on a yet a different night to finish it off! This is a good show & given the proper chance would probably do well. I agree, very short sighted.

I agree with other people, the drama was very good, the premise is current. The network did manage the airing recklessly.