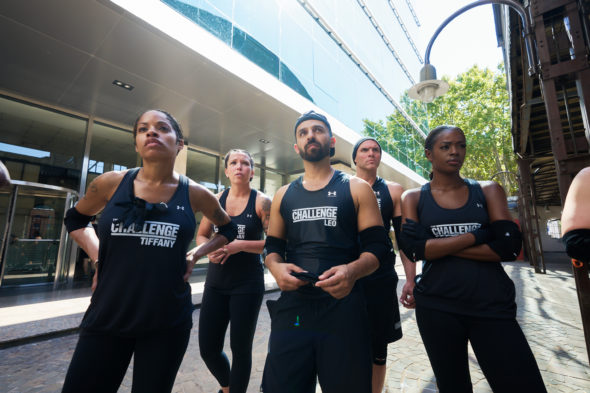 Reality show contestants get a second chance. Has The Challenge: USA TV show been cancelled or renewed for a second season on CBS? The television vulture is watching all the latest cancellation and renewal news, so this page is the place to track the status of The Challenge: USA, season two. Bookmark it, or subscribe for the latest updates. Remember, the television vulture is watching your shows. Are you?

Airing on the CBS television network, The Challenge: USA TV show is a spin-off of the long-running series The Challenge on MTV. It’s hosted by T. J. Lavin. The players are comprised of veterans from other competition shows like The Amazing Race, Big Brother, Love Island, and Survivor. Upon their arrival, the reality titans are given $1,000 to start their individual challenge accounts. They quickly discover that they must battle to keep and increase their handsome reward. In each episode, an algorithm pairs contestants who will face off to earn money for their accounts by winning challenges or eliminating their opponents. This won’t be an easy task, as they will be paired with a randomly selected competitor every episode — making alliances and strategies more difficult than ever. Players must adapt to survive the game and protect their challenge accounts. With a $500,000 grand prize and the title of Challenge Champion on the line, players are in a constant state of paranoia, unable to trust anyone but themselves.

The first season of The Challenge: USA averages a 0.40 rating in the 18-49 demographic and 2.18 million viewers in the live+same day ratings (including DVR playback through 3:00 AM). While these numbers don’t include further delayed or streaming viewing, they are a very good indicator of how a show is performing, especially when compared to others on the same channel. There can be other economic factors involved in a show’s fate, but typically the higher-rated series are renewed and the lower-rated ones are cancelled. Find out how The Challenge: USA stacks up against other CBS TV shows.

Will CBS cancel or renew The Challenge: USA for season two? The original series has had a long successful history on MTV and this version draws contestants from other CBS reality shows, providing some nice cross-promotion. I think there’s a good chance that it will be renewed. I’ll update this page with breaking developments. Subscribe for free alerts on The Challenge: USA cancellation or renewal news.

What do you think? Do you hope that The Challenge: USA TV show will be renewed for a second season? How would you feel if CBS cancelled this TV series, instead?