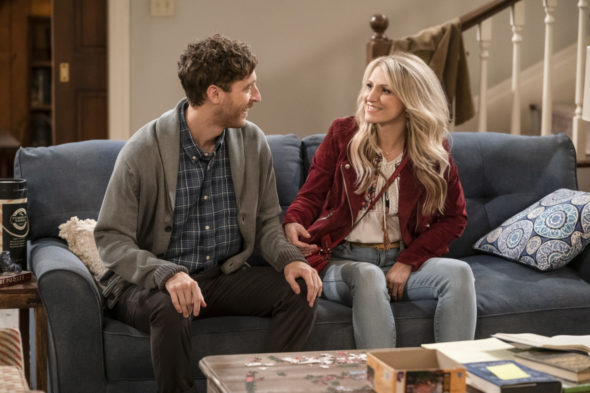 B Positive is coming soon to CBS’ Thursday night schedule. The new comedy comes from Chuck Lorre and Marco Pennette, and the network has released several new sneak peeks ahead of the premiere of the series. It’s joining the Young Sheldon and Mom sitcoms on that night, which Lorre also co-created.

CBS revealed more about the series in a press release.

“B POSITIVE is a comedy executive produced by Chuck Lorre and Marco Pennette, starring Thomas Middleditch and Annaleigh Ashford. The series revolves around Drew (Middleditch), a therapist and newly divorced dad who is faced with finding a kidney donor when he runs into Gina (Ashford), a rough-around-the-edges woman from his past who volunteers her own. Together, they form an unlikely and life-affirming friendship, as they begin a journey that will forever impact both of their lives.”

Check out the sneak peeks from CBS for B Positive below.

What do you think? Do you plan to check out this new TV series on CBS?

It looks so stupid from the previews!
These type of shows must be cheap to make, which makes them last several seasons on low to mediocre ratings.

Anyone criticizing this show needs to quit hating and give it a chance, I mean for God’s sake this show has not premiered yet, so why bother judging right away.

There are a lot of shows STILL on that are horrible & people are still watching them OR the network execs love it! The Unicorn, The neighborhood, Just Us to name just a few! Oh & all those singing shows…. UGH!

Maybe it is just me, but I haven’t like any of these sitcoms from Lorrie. I do like comedy but things like Workaholics, Broad City, South Park, Awkwafina’s show.