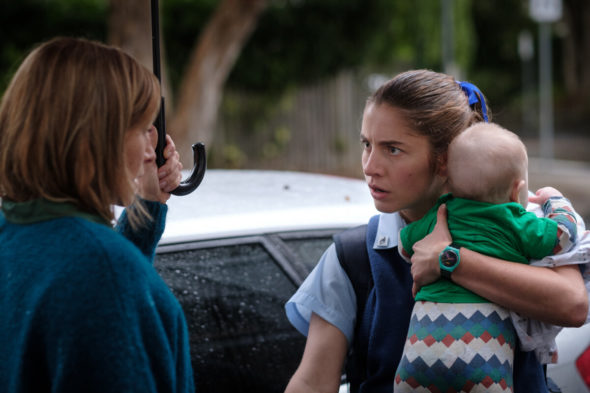 Oly’s life sees some big changes in the first season of the Bump TV show. As we all know, the Nielsen ratings typically play a big role in determining whether a TV show like Bump is cancelled or renewed for season two on The CW (it’s already been renewed in Australia). Unfortunately, most of us do not live in Nielsen households. Because many viewers feel frustrated when their viewing habits and opinions aren’t considered, we invite you to rate all of the first season episodes of Bump here.

An Australian comedy-drama series airing on The CW, the Bump TV show stars Nathalie Morris, Peter Thurnwald, Safia Arain, Claudia Karvan, Angus Samson, Carlos Sanson Jr., Ricardo Scheihing-Vasquez, and Paula Garcia. The story follows Olympia “Oly” Chalmers-Davis (Morris), an overachieving 17-year-old student who, along with her best friend Reema (Arain), has great plans for the future. Her boyfriend, Lachie (Thurnwald), is the son of a doctor and checks all of the right boxes. At school one day, Oly collapses in agony. As she’s rushed hospital in an ambulance, Oly and Angie are both stunned and horrified to discover that Oly is in labor with a baby that’s not her boyfriend’s. In deep shock, Oly and her parents must acknowledge how her life has irrevocably changed.

What do you think? Which season one episodes of the Bump TV series do you rate as wonderful, terrible, or somewhere between? Do you think that season two of the Bump show should air on The CW?

Bump should be renewed. It doesn’t get slide show promotion on the cw app front page. It’s getting high votes.