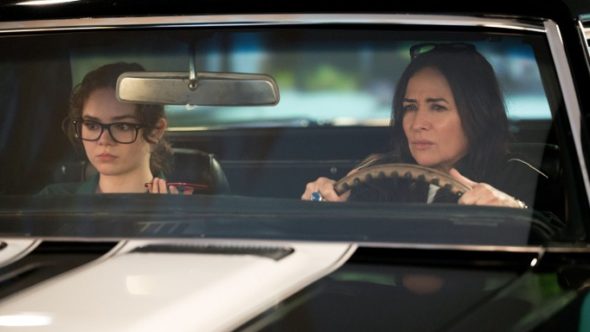 What does the future hold for Sam in the fifth and final season of the Better Things TV show on FX? As we all know, the Nielsen ratings typically play a big role in determining whether a TV show like Better Things is cancelled or renewed for season six (in this case, we know season five is the end). Unfortunately, most of us do not live in Nielsen households. Because many viewers feel frustrated when their viewing habits and opinions aren’t considered, we invite you to rate all of the fifth season episodes of Better Things here.

An FX dark comedy series, the Better Things TV show stars Pamela Adlon, Mikey Madison, Hannah Riley, Olivia Edward and Celia Imrie. Season five focuses on “the road ahead” for its unconventional, unfiltered heroine, Sam Fox (Adlon), so devoted to her life as a working actor and single mother of three that she’s left little time for that one elusive thing: herself. As she navigates three daughters, each coming of age; the challenges of her chosen career; and her mother’s increasing signs of aging (as well as her own), Sam embraces each moment, and each member of her family, with a fierce love, raw honesty and biting humor. As each of the Fox women come of age into the next phase of their life, they are inspired to reevaluate themselves, learn from the past and find their own direction. Guests in season five include Lena Waithe, Ron Cephas Jones, Danny Trejo, Marty Krofft, Clive Russell, Casey Wilson, Rainbow Sun Francks, Angela Kinsey, Kevin Michael Richardson, Nelson Lee, Lennon Parham, and Usman Ally.

What do you think? Which season five episodes of the Better Things TV series do you rate as wonderful, terrible, or somewhere between? Do you think that Better Things should be ending with season five?? Don’t forget to vote, and share your thoughts, below.