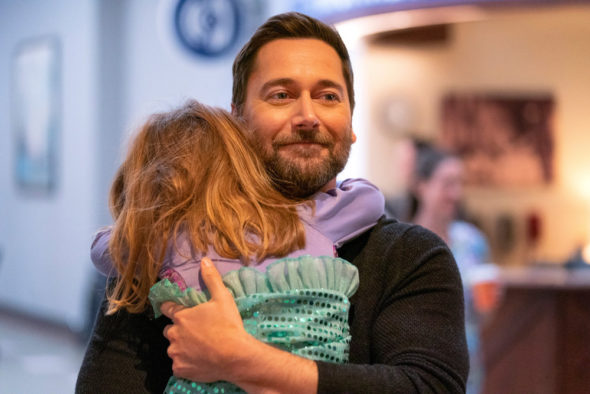 New Amsterdam wrapped its run on NBC earlier this week, and the series finale left viewers with some questions. SPOILER ALERT: The series ended with Dr. Max Goodwin (Ryan Eggold) taking a job in Geneva, Switzerland. A flash-forward twist followed that saw Max’s daughter Luna as an adult, returning to the hospital in a role similar to her father’s years before.

Janet Montgomery, Jocko Sims, Tyler Labine, and Sandra Mae Frank also star in the medical drama, which revolves around the lives and work of the staff of New Amsterdam Medical Center.

Series creator David Schulner and Peter Horton, both executive producers on the drama, spoke about the series and its ending after five seasons. Could the series have continued for more seasons? Horton said the following about NBC cancelling the drama, per Deadline:

“I still think this thing could have, should have run for another couple years. There are still so many stories to tell and these characters are so interesting. David came up with just a raft of amazing characters and I want to know more about all of them. We’re No. 3 on Netflix right now. I don’t think the audience is ready for it to end, either.”

As for the Luna twist in the finale, Schulner spoke about that decision and how the idea was first brought to him by his young daughter. He said the following, per NBC Insider:

“I was like, ‘OK, 11-year-old daughter. Leave the writing to me. Eat your cereal.’ And I totally blew it off. Then, a week later, Laura Valdivia, one of our writers, pitched me the same ending. And so I was like, ‘Oh, OK, I’m ‘gonna listen to you ’cause I pay you to come up with ideas.’ And then a week later, [writer] Erika Green and I were sitting on set and she said, ‘Call me crazy, but what if Luna came back as medical director in the finale?’ So, just over three weeks something was in the air that was just pointing the arrow there.

We began the show with Max in that auditorium on his first day saying, ‘I grew up in this hospital because my sister died here, and it made me want to be the medical director here when I grew up.’ So to have Luna come on her first day and be able to say, ‘My mother died here, I grew up here and seeing my father is what made me want to be a doctor.’ It just felt like such strong storytelling to end where you began.”

With how the show ended, a door is open to continue the story, possibly with Luna in the lead or Max’s journey in Geneva. Will that happen? The pair of executive producers are up for it. Horton said the following about the possibility, per TV Insider:

“We feel like this has got much more potential to it. It’s number three on Netflix. We’re not the only ones who feel that way. There’s a real audience response to this show, and there was even while we were on NBC. So we’re kind of feeling like we should come back in some form, but it’s not up to us. We can only sit there and charge that windmill so many times. … This would probably be a series of some kind, probably on a streamer somewhere. I guess I don’t know. I think we’re kinda open to whatever anyone wants to suggest.”

What do you think? Did you want to see more of New Amsterdam on NBC? Would you watch a spin-off?

I find it upsetting to see this hope-filled show be canceled. No longer the within the main demographics that allow those high ratings, I feel we are overlooked for our interest. No reality show for me!

Yes I would like new Amsterdam to be continued and I would definitely watch it! Such a good show and sorry it’s not in anymore

I most definitely would watch a spinoff from New Amsterdam. I’m really going to miss the show

Love this show. It coudl gone on for years. So many more stories to tell

I love this show and look forward to it every week. I was so mad to hear it was ending. Why? Why?
Hope you change your minds. And yes I would probably watch a spin off but prefer Amsterdam
Thank you from Ontario Canada

Yes. Excellent show. Bring it back on NBC.

Yes! It is the only show I look forward to every week! Please keep it going’

So bummed to see it end but absolutely loved the twist with Luna at the end – cue the tears! Loved this show – bring it to Netflix and let’s keep it going!!

I was not ready for New Amsterdam to end. I look forward to more episodes.I really fell in love with the characters.They all did an excellent job, however I was very disappointed how the writer made the brilliant, loving, caring Dr. Helen Sharps out to be an unethical doctor just because she recommended the approval of a life saving Cancer treatment for Max. They could have given her a better send off.

Ryan Eggold is literal GOLD. He played Max Goodwin so well that you almost forget he’s the same person that played Tom Keen in The Blacklist. Pure talent! I hope they surprise us and keep the show running or get picked up by Netflix maybe?