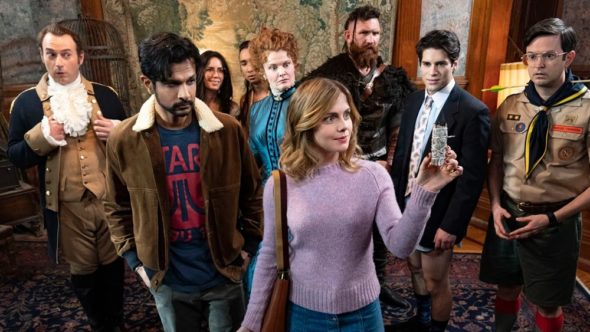 Ghosts returns to CBS in September, and the network has released two short videos teasing the return of the supernatural comedy series.

Starring Rose McIver, Utkarsh Ambudkar, Brandon Scott Jones, Richie Moriarty, Asher Grodman, Rebecca Wisocky, Sheila Carrasco, Danielle Pinnock, Roman Zaragoza, and Devan Chandler Long, the series follows married New Yorkers Samantha (McIver) and Jay Arondekar (Ambudkar) as they work to open a bed and breakfast in an estate that Samantha has inherited. Following a freak accident, she discovers that she can see the ghosts who are trapped there.

Season two finds the couple getting closer to finally opening their bed and breakfast. Following an accident at the end of the first season, it seems like Jay may also now be able to see the estate’s deceased residents.

Check out the two videos released by CBS for Ghosts season two below. Ghosts arrives on September 29th.

We’re almost two months away from the new season of #GhostsCBS! Here’s what the residents of Woodstone have been up to this summer while we all wait patiently for the B&B to open. #SummerOfGhosts pic.twitter.com/swVZrs6oEw

What do you think? Are you excited about the return of Ghosts on CBS?

LOVE LOVE LOVE Ghosts!!! It is the best comedy on t.v. (Sorry Young Sheldon) I also love the actors on the show, they mesh really well!!! Can’t wait for the new season!!!