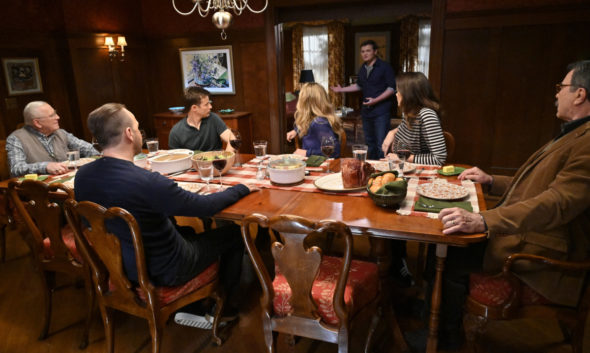 CBS is making another move ahead of the return of several of its popular 2020-21 shows. The series is shortening the season of several of its shows, including NCIS: Los Angeles, The Neighborhood, Blue Bloods, Bull, Magnum P.I., NCIS, NCIS: New Orleans, and SEAL Team.

NCIS: Los Angeles and The Neighborhood will each air 18 episodes, and the rest have had their episode counts lowered to 16 episodes, per Deadline.

CBS is still in talks with outside studios about the number of installments for Mom, Young Sheldon, Bob Hearts Abishola, B Positive, All Rise, FBI, FBI: Most Wanted, and SWAT. The Unicorn had an initial 13-episode order and will stay at that number.

The pandemic shut down and shortened seasons last spring, so it is not a complete surprise that the same has happened this season, especially with delayed returns for CBS and the other networks.

What do you think? Are you surprised that CBS has shortened the seasons of NCIS, Blue Bloods, and more of its popular shows for the 2020-21 season?

Well I only watch Blue Blood on CBS so they just shortened my time on their network!

Disappointing. We’re all home watching more TV than ever. It seems like an ideal time to capitalize on a captive audience.

Understand with Covid however please after this is over, go back to to how it was. Agree people love the shows.

I personally think it is a BIG mistake, since these shows are the most watched and popular shows on tv!

Please bring back Magnum P.I., Bull, and NCIS Los Angeles to full episodes, they are my favorite shows to watch

The only good thing is that are still on the air, not cancelled.

Yes, I am surprised. Just because they are starting later doesn’t mean they have to cut episodes. They can have same amount of episodes, just let them run longer. Remember when tv used to start in september and end late may. Any excuse.

But I’m sure CBS All Access will give a small refund commensurate with the reduced episode quantities, right ? Not.

Not surprise, why do that, COVID-19 will still be here , so CBS will have to show again the season that was on TV few months past.

Really 13 Episodes. Make it at least 16 episodes or even 15 episodes not 13. But I understand because of the pandemic. But that is whack.

Nothing surprises me anymore with the TV stations.

For Blue Bloods, you have several characters that are up there in years and more at risk. Of course you need to be more careful.

Darn, sorry to see that but certainly understandable.

Why would they shorten the season for Blue Bloods? They should add more episodes!

Yes, a cornerstone of covid safety is Staying Home, so a guaranteed bigger audience, and they’re producing fewer episodes? Only acceptable reason is increased production difficulties due to covid.

Bummer got shorter this season due coronavirus pandemic love bull, NCIS series all of them what a shame look forward next month season premiere.