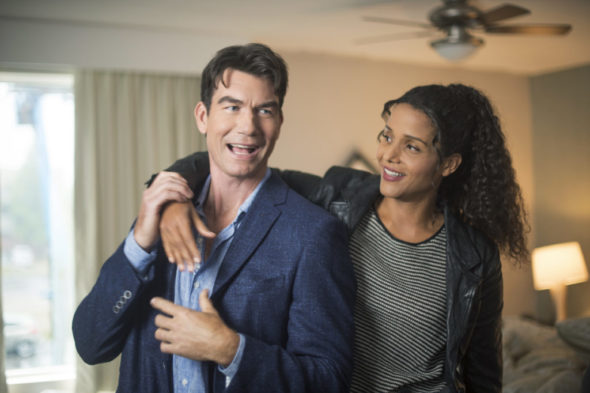 Will Harley continue to be fulfilled by small-town life in the second season of the Carter TV show on WGN America and CTV Drama Channel in Canada? As we all know, the Nielsen ratings typically play a big role in determining whether a TV show like Carter is cancelled or renewed for season three. Unfortunately, most of us do not live in Nielsen households. Because many viewers feel frustration when their viewing habits and opinions aren’t considered, we invite you to rate all of the second season episodes of Carter here.

A crime comedy-drama series, Carter stars Jerry O’Connell, Sydney Poitier Heartsong, Kristian Bruun, Brenda Kamino, and Lyriq Bent. The series revolves around Harley Carter (O’Connell), the star of a hit detective TV show who decides he needs a break from Hollywood. Carter returns to his small hometown where he quickly discovers that his years of playing a fictional detective come in handy when he finds himself immersed in real-life mysteries. In season two, Carter puts down roots as a celebrity Private Investigator and doubles down on his fame in a world where life continues to imitate TV. Carter discovers that the toughest cases to solve are personal ones when he finds himself embroiled in a love triangle with his lifelong best friend, Detective Sam Shaw (Poitier), and her interim police chief boss, Joyce Boyle (Bent).
END_OF_DOCUMENT_TOKEN_TO_BE_REPLACED