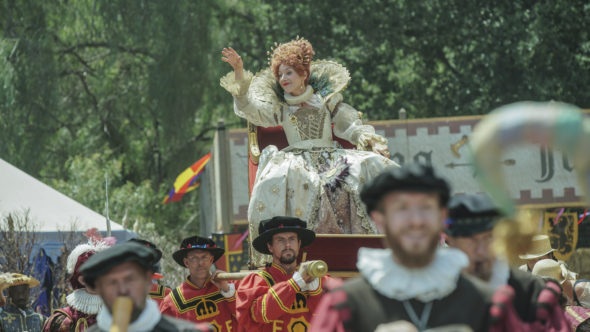 How goes Amanda Klein’s fresh start during the first season of the American Princess TV show on Lifetime? As we all know, the Nielsen ratings typically play a big role in determining whether a TV show like American Princess is cancelled or renewed for season two. Unfortunately, most of us do not live in Nielsen households. Because many viewers feel frustration when their viewing habits and opinions aren’t considered, we’d like to offer you the chance to rate all of the season one episodes of American Princess here. *Status update below.

A Lifetime comedy-drama, American Princess stars Georgia Flood, Lucas Neff, Seana Kofoed, Rory O’Malley, and Mary Hollis Inboden. The runaway bride series centers on Amanda Klein (Flood), who is all set to marry fiancé Brett Weinbaum (Ehrich) when she catches him in flagrante delicto with another woman. When she reacts, the other woman is injured, so Amanda panics and flees the wedding venue, and winds up on the grounds of a Renaissance Faire, where she decides to remain.
END_OF_DOCUMENT_TOKEN_TO_BE_REPLACED