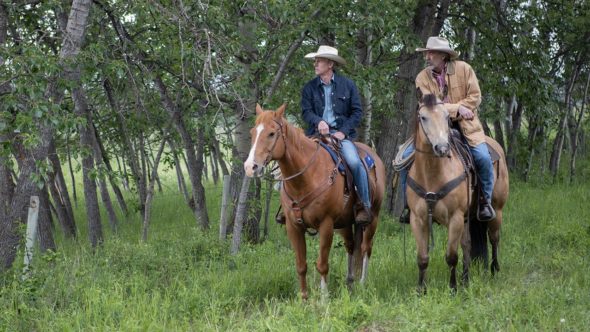 How will Amy and her family cope with their loss in the 14th season of the Heartland TV show on UPtv? As we all know, the Nielsen ratings typically play a big role in determining whether a TV show like Heartland is cancelled or renewed for season 15. Unfortunately, most of us do not live in Nielsen households. Because many viewers feel frustration when their viewing habits and opinions aren’t considered, we invite you to rate all of the 14th season episodes of Heartland here.

An UPtv family drama, the Heartland series is based on the bestselling series of books by Lauren Brooke. It originates on CBC in Canada and also streams on the Netflix and the UP Faith and Family streaming services in the United States. The cast includes Amber Marshall, Michelle Morgan, Shaun Johnston, Alisha Newton, Chris Potter, Graham Wardle, Kerry James, Nathaniel Arcand, and Jessica Steen. It’s a multi-generational saga that’s set on the Heartland ranch in the rolling foothills of Alberta, Canada. It follows Amy Fleming (Marshall), her older sister Lou (Morgan), and their Grandfather Jack (Johnston). Together, they confront the challenges of running the ranch that has been in their family for generations. Season 14 of Heartland finds horses healing Amy as much as Amy heals horses. While Amy struggles with a life-changing challenge, the entire town of Hudson will have to deal with an unexpected disaster that threatens to derail Lou’s first term as mayor. But, the family will pull through together and be stronger as a result. Family is courage, and times change.
END_OF_DOCUMENT_TOKEN_TO_BE_REPLACED