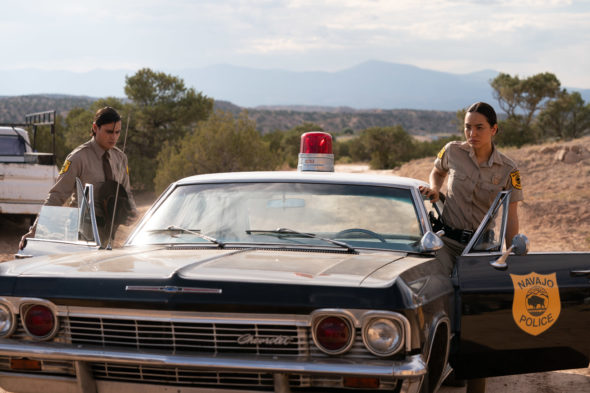 What forces are at work in the first season of the Dark Winds TV show on AMC and AMC+? As we all know, the Nielsen ratings typically play a big role in determining whether a TV show like Dark Winds is cancelled or renewed for season two. Unfortunately, most of us do not live in Nielsen households. Because many viewers feel frustrated when their viewing habits and opinions aren’t considered, we invite you to rate all of the first season episodes of Dark Winds here. Status Update Below.

An AMC and AMC+ Western psychological-thriller series, the Dark Winds TV show stars Zahn McClarnon, Kiowa Gordon, Noah Emmerich, Jessica Matten, Rainn Wilson, and Deanna Allison. The story is set in 1971 on a remote outpost of the Navajo Nation near Monument Valley. Lieutenant Joe Leaphorn (McClarnon) of the Tribal Police is besieged by a series of seemingly unrelated crimes. The closer he digs to the truth, the more he exposes the wounds of his past. Leaphorn is joined on this journey by his new deputy, Jim Chee (Gordon). Chee also has old scores to settle from his youth on the reservation. Together, the two men battle the forces of evil, each other and their own personal demons on the path to salvation.
END_OF_DOCUMENT_TOKEN_TO_BE_REPLACED