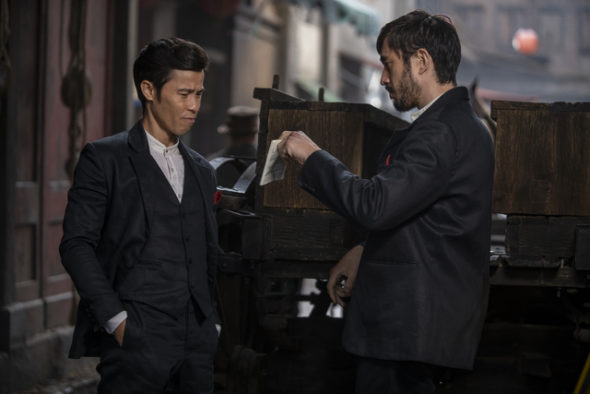 Can Ah Sahm take down the Long Zii leader in the second season of the Warrior TV show on Cinemax? As we all know, the Nielsen ratings typically play a big role in determining whether a TV show like Warrior is cancelled or renewed for season three. Unfortunately, most of us do not live in Nielsen households. Because many viewers feel frustrated when their viewing habits and opinions aren’t considered, we invite you to rate all of the second season episodes of Warrior here. *Status Update Below.

A Cinemax action crime drama, Warrior stars Andrew Koji, Kieran Bew, Celine Buckens, Olivia Cheng, Dianne Doan, Dean Jagger, Langley Kirkwood, Hoon Lee, Christian McKay, Dustin Nguyen, Joe Taslim, Chen Tang, Jason Tobin, Miranda Raison, Joanna Vanderham, Tom Weston-Jones, and Perry Yung. The series follows Chinese immigrant Ah Sahm (Koji), who arrives in San Francisco in 1878, during the Tong Wars, to look for his sister, Mai Ling (Doan). As a gifted fighter, it’s not long before one of the most powerful organized crime families (known as a tong) in Chinatown recruits Ah Sahm to be its hatchet man. Season two follows rival Chinatown tongs, the Hop Wei and the Long Zii, as they fight for dominance amidst the growing anti-Chinese racism that threatens to destroy them all. After barely surviving last season’s disastrous showdown, Ah Sahm is back with the Hop Wei and determined to wreak vengeance on Long Zii’s new leader. The series is based on the writings of martial arts legend Bruce Lee.
END_OF_DOCUMENT_TOKEN_TO_BE_REPLACED