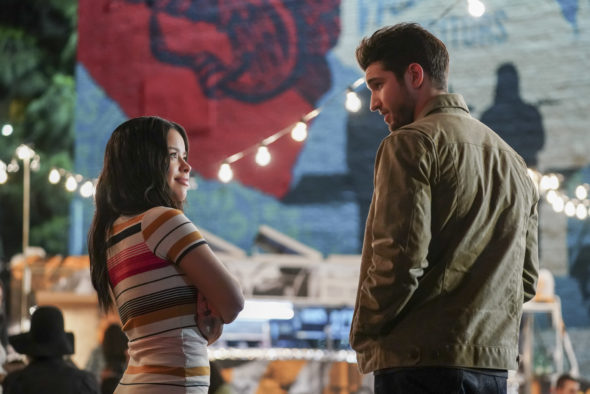 What new drama will unfold for the Coterie Crew in the fourth season of the Good Trouble TV show on Freeform? As we all know, the Nielsen ratings typically play a big role in determining whether a TV show like Good Trouble is cancelled or renewed for season five. Unfortunately, most of us do not live in Nielsen households. Because many viewers feel frustrated when their viewing habits and opinions aren’t considered, we invite you to rate all of the fourth season episodes of Good Trouble here. *Status Update Below.

A Freeform drama series, the Good Trouble TV show stars Maia Mitchell, Cierra Ramirez, Tommy Martinez, Emma Hunton, Sherry Cola, Zuri Adele, Beau Mirchoff, Josh Pence, Priscilla Quintana, and Bryan Craig. Booboo Stewart recurs. The story centers on Callie (Mitchell) and Mariana (Ramirez) from The Fosters series and other residents of Downtown Los Angeles’ The Coterie. They juggle careers, love, and the 20-something growing pains at a time in your life where your friends are your family.
END_OF_DOCUMENT_TOKEN_TO_BE_REPLACED